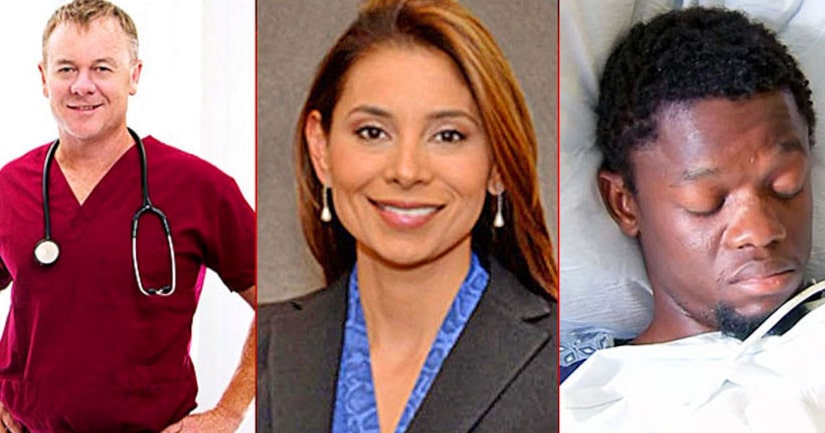 BOSTON -- (WBZ/AP) -- A man accused of brutally killing two engaged doctors inside the penthouse of a luxury South Boston condominium was arraigned in his hospital bed Monday afternoon.

Bampumim Teixeira, 30, of Chelsea, faced a judge in his room at Tufts Medical Center on two charges of murder. He was ordered held without bail.

He sat in his bed on the sixth floor with his eyes closed as the arraignment took place.

Police found the bodies of Dr. Lina Bolanos and Dr. Richard Field Friday night at the Macallen Building in South Boston after responding to a report of a man with a gun.

Prosecutors said officers responded to the apartment because a friend of one of the residents said he got a text from one of them shortly before 8 p.m. saying there was a gunman in the apartment and pleading for help.

According to prosecutors, police arrived and found a set of keys on the floor in front of the apartment's door. After knocking and announcing themselves but hearing no response, they went in using the keys–and during a sweep, they encountered Teixeira and exchanged gunfire with him.

He was shot in the hand, abdomen, and leg. He was taken to the hospital with non-life-threatening injuries. No officers were injured.

Prosecutors said Teixeira told police there was another person inside the apartment who would fire at them if they went in.

Teixeira was wearing all black, including gloves, when arrested. He has a criminal history of robbing banks, said police, who did not provide a motive in the case but said he most likely knew the victims.

Bolanos, 38, was a pediatric anesthesiologist at Massachusetts Eye and Ear and an instructor at Harvard Medical School. Field, 49, also an anesthesiologist, worked at North Shore Pain Management.

The doctors hands were tied and their throats were cut, sources told WBZ-TV.

Prosecutors said they were found bound, and that a black backpack full of what appeared to be Bolanos's jewelry was found nearby.

The Suffolk County District Attorney's Office said Teixeira has a pair of larceny convictions on his record.

In June of last year, he passed a note demanding money at a Boston bank. He committed the same crime two years earlier.