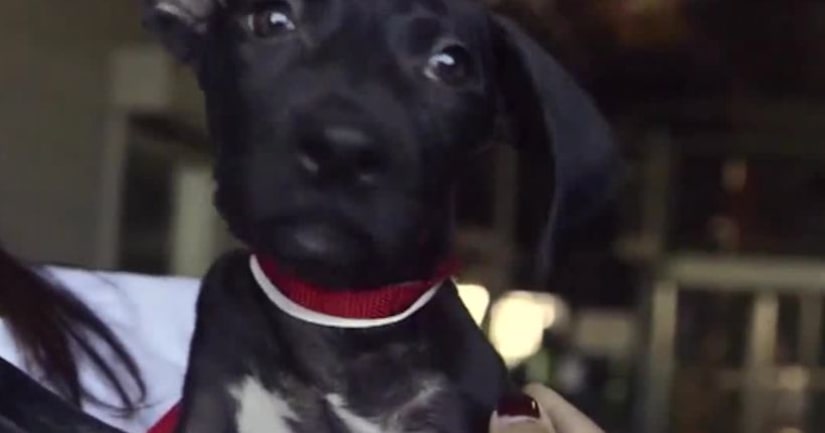 QUEENS, N.Y. -- (WPIX) -- A dog was allegedly used as a drug mule to traffic more than $1 million worth of heroin to New York, the Queens District Attorney said Monday.

The Avi Labrador mix had been shipped along the same route as many rescue dogs have been for years — and that has at least one major dog rescue organization, which is not at all involved in the drug crimes, concerned that this major bust will affect its legitimate, humane effort to save dogs' lives.

The dog had been shipped from Puerto Rico to Kennedy Airport, where authorities discovered the stash hidden in the false bottom of the animal's crate.

Samuel Seabrooks, 35, of the Bronx, and Carlos Betancourt-Morales, 27, of Carmel, New York, were arraigned Sunday for their alleged roles in the scheme.

They're charged with first-degree criminal possession of a controlled substance and second-degree conspiracy. A judge set their bond at $500,000 each, or $250,000 cash bail each.

Prosecutors said that the suspects met at an IHOP in the Bronx last Friday, then left in separate cars to JFK. They had a brief conversation at the airport's American Airlines Priority Parcel Services area, then Betancourt-Morales walked into the cargo building and signed for a crate holding the dog.

He was pushing the crate on a rolling cart toward the exit when he was stopped by police.

The next day, officers executed a search warrant on the crate and found 10 bricks — 4 inches wide and 6 inches long — packed with heroin and stamped with the Nike Swoosh symbol and a five-pointed star, prosecutors said.

In all, the crate's false bottom was carrying 10 kilograms of heroin, or about 22 pounds — worth more than $1 million in street value.

Founder of the Sato Project, a dog rescue organization, said she is "shocked and angry" that this happened.