The Daily Democrat reports a Texas search and rescue group has been continuously searching for missing Yolo County residents Enrique Rios and Elijah Moore, who disappeared in 2016.

The team has been to Yolo County, California, multiple times, including three times in the past 12 months.

The Mercury News reports a motion by prosecutors to consolidate the cases against Jesus Campos and Chandale Shannon, who were allegedly involved in the 2016 disappearances and deaths of Yolo County teens Enrique Rios and Elijah Moore, was granted during a hearing in Yolo Superior Court on Oct. 3, 2019. A jury trial was scheduled to begin on March 23, 2020. It’s estimated to last 10 days.

Both Campos, 20, and Shannon, 22, are facing murder and kidnapping charges with enhancements.

A month after a jury found David Froste guilty of murdering Rios and Moore, Yolo County Superior Court Judge David Rosenberg sentenced Froste to a term of life in prison without the possibility of parole, according to the Vacaville Reporter.

Rosenberg also denied a new trial motion filed by the defense on the grounds of juror misconduct.

Chandale Shannon, 21, of Winters, and Jesus Campos, 18, of Woodland were arrested Friday, June 8, 2018, on charges of murder and conspiracy, according to the Yolo County Sheriff's Office, KCRA-TV reports. Campos also faces kidnapping charges.

Jonathan Froste, 21, of Knights Landing, was taken into custody Saturday and booked on charges of murder and kidnapping, officials said.

According to a criminal complaint released Monday, a fourth suspect was also named. David Froste was arrested on similar charges connected to the teens' disappearance, including murder and kidnapping, per the complaint.

Crime Watch Daily is joining local law enforcement and the FBI as they try to find two missing teens who both vanished under suspicious circumstances.

The mother of Enrique Rios thought he just left for school on Oct. 16, 2016, but the 16-year-old never made it there. She later received a troubling text message from his phone.

Less than three weeks after the search started for 16-year-old Enrique Rios, investigators got a report of another missing teen, and it was one of his Enrique's friends.

Lola Rios Gutierrez has been teetering at the edge of an emotional precipice ever since the last time she saw her 17-year-old son Enrique, who failed to show up for school on a cold October morning.

"It went to a point where I started getting angry. So I was sending him some messages and saying 'You need to get your butt home, you need to come home,' but he would never respond. And I reported him missing," said Lola.

It's been five long months of heartbreaking silence. Gutierrez says there are many pieces to the puzzle that just don't fit.

"The last thing I saw him wearing was shorts and a T-shirt, and it was cold," said Lola. "I mean, he didn't take anything."

"He was so happy to have his I.D. I don't see him leaving this behind," said Lola.

At first the local cops believed Enrique had simply run away from home in the small town of Esparto, California, 34 miles west of Sacramento. He had done it before.

But this time, investigators say, the case took a bizarre and troubling turn. Less than three weeks after the search for Enrique Rios started, investigators got a report of another missing teen.

"Immediately I knew that there was more to it than a runaway situation," said Alicia Moore.

Alicia is the mother of 17-year-old Elijah Moore, a friend of Enrique's who attended the same school. No one seems to know just how close the two teens were, but 18 days after Enrique disappears, Elijah mysteriously goes missing.

"That is not his behavior," said Alicia.

At a check-cashing service location, surveillance video shows Elijah walking up to the counter to cash a paycheck. He briefly speaks to the cashier, then puts the empty envelope away and walks out. He hasn't been seen since.

Alicia says it simply wasn't in his nature to run off like that.

Alicia filed a missing-persons report with the local cops too. At first she was frustrated.

"I went back to the check-cashing to see had anyone come to retrieve the video footage, and when they told me that no one had showed up, no police or law enforcement, then that's when I got really angry," said Alicia. "And it as because he was labeled a runaway."

Even with barely a shred of hard evidence, investigators began to connect the dots, and it sketched a sinister picture.

For Lola and Alicia, it told them only one thing.

"I felt like it was connected right away," said Lola. "I was really nervous and I reached out to his mom. It was very alarming that they both went missing from the same program, from the same school."

And that's not all. The missing boys were pals and classmates, and they both worked at a construction site, part of an after-school program for teenagers at risk.

But someone did say something. Lola and Alicia each received suspicious texts from their sons explaining why they weren't coming home.

In one, Enrique cryptically explains: "I need some time. I can't handle all of this."

His mother replies: "What is all of this?"

Enrique reportedly texts back: "There's too much pressure on me."

"Even the detectives that have gone through his messages and everything, they don't think that it would be something that he would write," said Lola.

"It was from Elijah's phone, but the message said 'I'm in the Bay Area with a girl.' I have family in the Bay Area, and for Elijah to go to the Bay Area and not contact anyone is completely out of character," said Alicia.

The FBI has stepped in to help distribute fliers across the United States and Mexico and a GoFundMe page has been set up.

"In regards to Elijah, he had to have been either overpowered by more than two people, or drugged," said Alicia.

In her darkest hours Lola Rios Gutierrez fears the worst: That she'll never see her only son again.

"Whoever doesn't have the heart to come forward, just say what's going on, where the boys are, if they are OK," said Lola.

Two mothers who never knew each other now share the same grief.

Both boys are 17 years old.

There is a $10,000 reward offered for information that leads to their whereabouts.

Anyone with information related to the case is urged to contact the FBI at (800) 225-5324. Callers may remain anonymous. 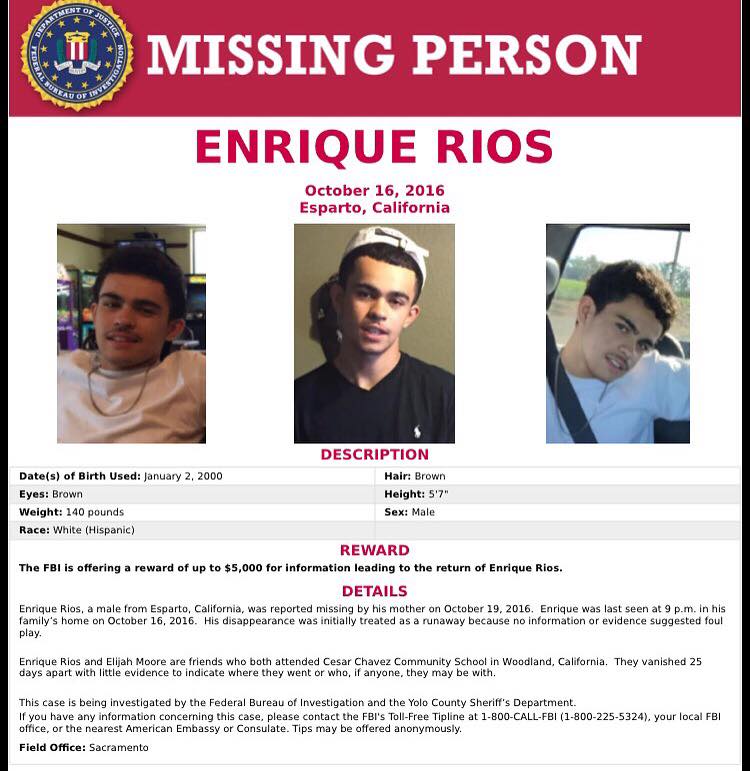 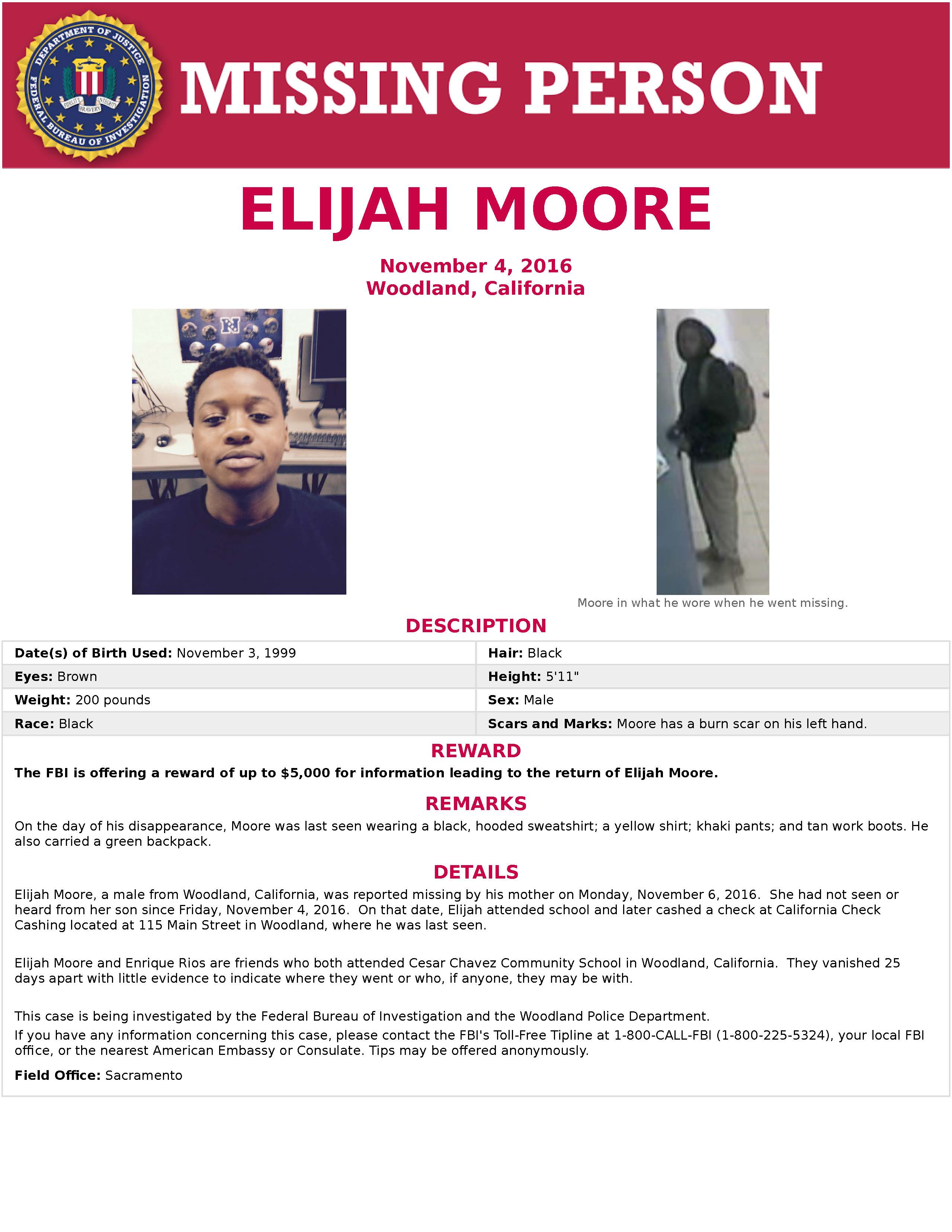