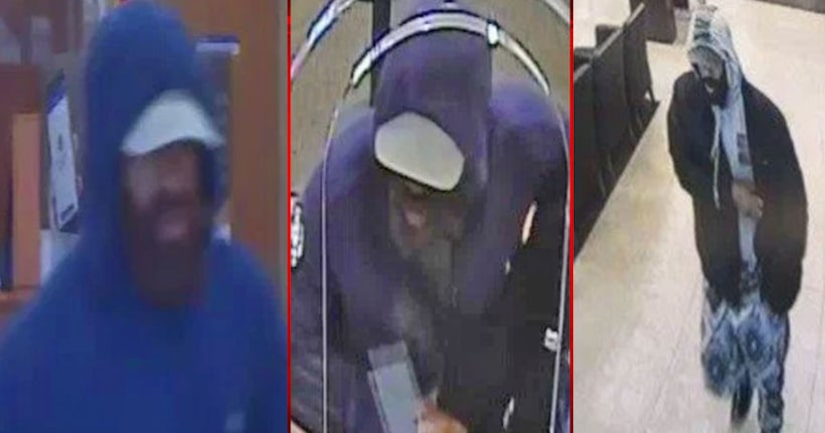 HOUSTON -- (KIAH) -- Investigators are searching for a gunman wearing a thick, fake beard and who has robbed at least two banks in the Houston area, the FBI Violent Crime Task Force said. He's called the "Bearded Bank Bandit," and investigators are concerned about his escalating and aggressive tactics.

Officers said the bandit's most recent heist was Saturday at a Chase Bank on Bellaire Boulevard near Synott Road.

Investigators said the gunman walked in around 9:10 a.m. and waited in line. When an employee attempted to help him, he aggressively grabbed the employee, pressed a black semi-automatic handgun into her side before walking her to the counter and demanding $10,000 cash. He was given an undisclosed amount of money and then left the bank on foot, the FBI said.

No one was seriously hurt.

The FBI believe he is the same man responsible for a robbery on New Year's Eve at a Chase bank on Silber Road, just off I-10 westbound. Officers said he entered the bank around 9:45 p.m. and demanded $50,000 in cash while waving his gun at employees. Tellers gave the gunman a considerably lesser, undisclosed amount of cash. And then he left the bank, hopping on a bicycle and escaping the area.

No one was hurt in that robbery either.

He is in his 30s, around 6 feet tall and welling around 160 pounds with a medium build, the FBI said. In both robbers, the victims said he was wearing a fake "James Harden-like" beard. Witness said the bandit also has should-length braids or dreadlocks.

Anyone with information related to the robberies is asked to call Crime Stoppers of Houston at (713) 222-TIPS (8477) or the FBI Houston Field Office at (713) 692-5000. Crime Stoppers is offering up to $5,000 for tips leading to the identification or arrest of the bandit.