UPDATE May 10, 2017: A Utah court dismissed criminal charges against Anne Hardcastle and Michael Taylor prior to their trial, the New York Post reports .

The Salt Lake Tribune reports: "A trial was expected to begin next week, but prosecutors on Wednesday asked a judge to dismiss the case, citing 'evidentiary issues that have recently arisen.' Third District Judge Paige Petersen granted the dismissal."

Michael Taylor and Anne Hardcastle returned to Utah to face the judge and Crime Watch Daily was there to ask them about what really happened in that hotel room at this year's Sundance Film Festival in Park City, Utah.

The Sundance Film Festival was created by legendary actor and director Robert Redford. It's the largest independent film festival in the United States, held in the beautiful mountain resort of Park City, Utah.

"It's the movie-makers, it's publicists, it's actors," said New York Post Reporter Dana Schuster, who is covering the story. "It's a lot of New Yorkers who are there just for the parties." Including 45-year old New York financier Michael Taylor.

One night in January, at a bar on Park City's Main Street, Anne and Michael run into a beautiful young woman. It's laughs and tequila shots shared between strangers, fast becoming friends.

"They invited the girl to come to an after-party with them for a film," said Schuster.

What's supposed to be a quick stop at the hotel turns into more booze, Ecstasy -- and something else.

Apparently that's not an unusual request from this sexually liberated couple.

"Anne was not shy about her bisexuality," said Schuster. "When she started dating Michael Taylor, he apparently told his colleagues during happy hours, very openly, that Anne, his new girlfriend, was indeed bisexual, and that if a girl was ever brought into the relationship it was solely for Anne, not for him, and so that was well known."

But their new friend from the bar isn't interested. But before she can leave...

"Everything went black," said Schuster. "She doesn't remember anything that happened thereafter."

Still drugged and dazed, the woman makes her way to the Park City Medical Center, where she tells hospital staff that she's been sexually assaulted. The Park City Police are called in to take a report. In it, the alleged victim's injuries are detailed as: "Multiple injuries including scratches on her chest, suction marks on her neck, fresh bruises on her upper left arm, a bite mark on her left forearm, and several scratches on her back and stomach."

While still being checked out at the hospital, the 23-year-old woman gets a message.

Park City Police encourage the woman to accept the request and get more information about what happened during the reportedly sadistic, sex-fueled night. The accuser pushes Anne Hardcastle for details.

"She asks Anne, 'I can't remember, can you tell me, I'm covered in scratches and bruises,' and Anne replied, 'You said you liked it rough so I gave you what you asked for,'" said Schuster.

Summit County prosecutors have enough evidence and file felony charges against the alleged deviant duo. The couple was ordered to return to Park City to face the judge about what allegedly took place at the film festival.

"He lost his job soon after the charges were filed against him. The company wanted nothing to do with him and he was just let go," said Schuster.

Crime Watch Daily tracked the couple back in New York City. Chris Hansen caught up with Michael Taylor for his side of the story. "I'm a hundred-percent innocent," Taylor said, but he declined to talk further on camera.

Their day in court in Park City was in September, and Crime Watch Daily was there to catch the accused kinky couple as they arrived at the courthouse for a hearing. Not a word from the accused lovers, but they pleaded not guilty to all charges.

Anne Hardcastle and Michael Taylor have reportedly surrendered their passports and were free on $20,000 cash bail. 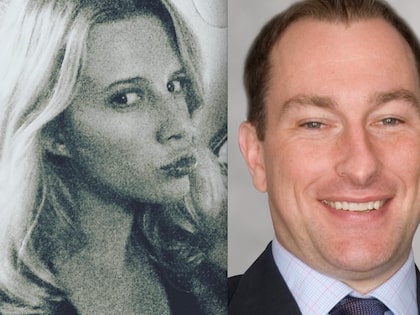