Jesse Wilson vanished into the scorching heat of the Arizona desert on June 18. When Jesse went missing, search teams scoured the desert near his house in Buckeye, Arizona.

What happened to the 10-year-old? Did he run away from home? Was he kidnapped? Police haven't ruled out foul play.

Jesse's mom Crystal reportedly didn't call 911 when she discovered her son was missing in the middle of the night. Instead she made a non-emergency call to cops.

Jesse had disappeared one other time. Jesse had climbed out of his window and went to a house down the street. Police found him in the garage of that house.

Neighbors at his old home in nearby Avondale tell Crime Watch Daily Phoenix affiliate KNXV they remember Jesse as the boy who knocked on doors after school begging for food.

Two neighbors say they fed Jesse and his brother and sister.

Avondale Police made a welfare check and discovered a shocking sight. Crime Watch Daily obtained the police report, which said: "The boys each had a harness strapped to their backs ... which was then connected to the post on the bed."

According to the report Crystal told cops she bought the harness at a well-known children's store and it kept the boys from going outside in the middle of the night. The police determined "there was no evidence to support child abuse or claims of malnutrition."

Cops found nothing to suggest Crystal had anything to do with Jesse's disappearance.

Next week it will have been five months since Jesse Wilson vanished. His family holds out hope Jesse is alive. 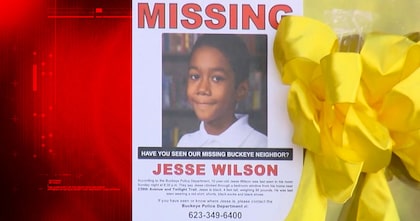