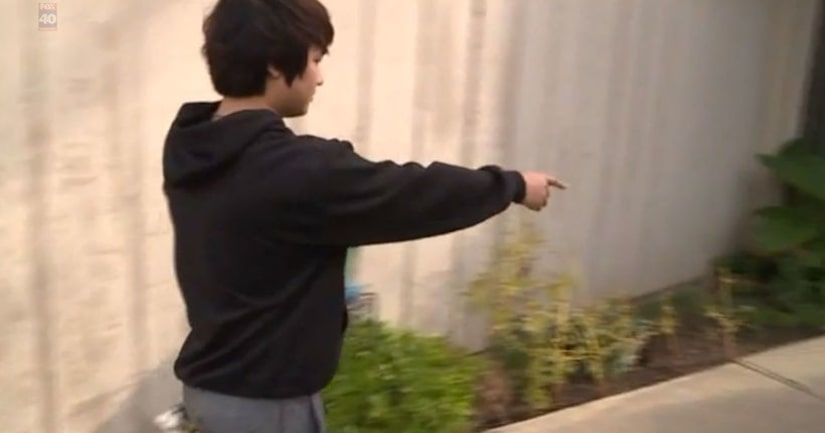 STOCKTON, Calif. -- (KTXL) -- When 18-year-old Tyson got a knock on the front door Monday afternoon, he never expected he'd be in hand-to-hand combat with three men claiming to be cops. The trio tried to barge their way inside the home.

"They say they're the police, and they say they had a search warrant for my house," the McNeer High senior said.

Still, that wasn't enough information to convince Tyson to let them past the front door.

He was babysitting his little nieces and nephew at the time of the attempted home invasion.

"Was real suspicious, asked them for their badges, and their search warrant," he said.

Tyson said the badges looked phony, like the type you'd buy on eBay. And then he asked to see the search warrant.

"That was when they looked at each other with a blank face and then they ignore my question... At that point, I knew they weren't police," he said.

Tyson then asked them to step back and leave.

And that's when one robber pulled Tyson outside. The fight was now on.

Somehow, Tyson's skills as a trained wrestler, MMA fighter and boxer took over, and he was able to overpower two of the men.

"It happened in a flash. All I knew is I took down two guys," he modestly said all the while thinking about the safety of his family inside.

"I had to protect my little nieces and nephew. It wasn't a matter of whether or not they had any kind of weapon. It was a matter of protecting them," he said.

But the struggle wasn't over.

"Another white male came and grabbed me by my wrist and pulled me out. And after that, that's when we started brawling," he said.

Then a third man struck him on the head.

"I screamed out to my little nephew and nieces to run, go hide. Once I saw them run, I let go of them, I knew I had to escape and just call for help," Tyson said.

At that point, the suspects took off in a silver Chevy pickup.

Stockton police are still searching for the men.

Tyson says investigators told him that he and his family may have been targeted by the phony police officers, who were on a hunt for marijuana.

Tyson says his family doesn't have any.

"Did you ever think it would be hand-to-hand combat, saving someone's life... those types of skills would come into play for something this serious?" FOX40 asked him.

"Yes of course," Tyson said. "You're using your body to do physical work. That right there could be used against anything in life."