Stacy Peterson's sister says she knows where Peterson's remains are located and is asking for help in recovering them, the Chicago Tribune reports.

More than 10 years after the disappearance of Drew Peterson's fourth wife, her sister Cassandra Cales launched a GoFundMe campaign this week to support her continued search efforts. In an interview with the Tribune, Cales said she is planning to hire divers to conduct another search of the Chicago Sanitary and Ship Canal and started the fundraising page at supporters' urging.

He's been married four times. One of his wives his dead, another is missing, and the two others consider themselves very lucky to be alive. Now there are new details on headline-making former police sergeant Drew Peterson.

Four wives, a suspicious death and a disappearance. The life and crimes of Drew Peterson have made international headlines. But now, speaking publicly, for the first time in this Crime Watch Daily exclusive, Drew Peterson's own sister-in-law is breaking her silence to talk about what it was like to live under the same roof with a killer.

Before former police sergeant Drew Peterson was a household name for all the wrong reasons, Norma Peterson knew him as the sometimes over-the-top brother of her husband Paul.

First, there was wife Carol. After two kids, and six years of marriage, she caught Drew cheating, and that was the end.

Then, there was Vicki. She lasted 10 years before asking for a divorce when Drew started dating Kathleen Savio. But he was also very attached.

And according to Susan, Kathleen didn't find out until much later, only after Drew made her wife number three. But by most accounts, her relationship with Peterson deteriorated fast.

After 11 years of matrimony, Kathleen caught drew in a very familiar position. Soon, Stacy Cales became wife number four. She was 16 when they met. When Kathleen found out, she hired a divorce attorney, then sent drew to live with Stacy.

However, the details of the divorce settlement with Kathleen had still yet to be finalized. According to Susan Savio Doman, Kathleen's sister, Kathleen was set to receive money from Drew, and possibly half the house and custody of the children.

Instead, a different kind of ruin: Two weeks before Kathleen and Drew's settlement was to be finalized, neighbors found her dead in her empty bathtub, a one-inch gash on the back of her head.

"[Drew] had said that they had found Kathy dead at her home, and 'they're kind of looking at me sideways so if they say anything to you,'" said Norma Peterson, Drew's sister-in-law.

A coroner's jury of six would soon rule the death an accidental drowning. But Kathleen's sister Susan says she came to a very different conclusion, and that it happened as soon as she heard how her sister died.

"The Friday before she passed away, I called her and she said to me 'I am not going to make it,' she said 'Drew is going to kill me and it's going to be an accident and no one is going to find out about it,'" said Susan Savio Doman.

But there was little they could do. Drew had reportedly been questioned around the time of the death, but had an alibi: He was with Stacy.

With his third wife buried and behind him, Peterson was free to make Stacy, 30 years his junior, wife number four. Soon after marrying Stacy, the couple had two children, Drew Peterson's fifth and sixth. Stacy even took care of the two children Drew had with Kathleen, who moved in with them after her death.

But somewhere between the beginning and four years later, things changed in a big way.

"My husband had gotten up to watch the news," said Norma Peterson. "It was 5:30, 6 o clock in the morning, and he woke me up to tell me that Stacy was on the news."

According to Drew Peterson, there was nothing anyone could've done. After four years of marriage and two kids, he says Stacy went missing by choice.

"He just kept saying 'Stacy ran off, she took the car, she took money, she took bikinis," said Cassandra Cales, Stacy's sister. "You know, 'She left me.' She wouldn't leave the kids."

However, there was evidence to suggest Stacy had been trying to get away from Peterson.

"She said she was gonna leave, she was filing for divorce that Monday," said Cassandra. "She told him."

Stacy reached out to local pastor Neil Schori for counseling. Schori says there was one session he'll never forget. It was the last time he ever saw her.

"At first, just told me more things about her life and her marriage, how hard it was, and the jealousy, and then she looked at me and I just had this sense that she was going to say something profound," said Schori. "And I said whatever you want to tell me you're free to do it, and she sort of stared at me, and she said, 'He did it,' and I said 'He did what?' And she said 'Drew killed Kathleen Savio, Drew killed his third wife.

"I said to her, 'What do you want me to do with this information?'" said Schori. "And she said I don't want you to do anything, I just want you to know.'"

A few weeks later, she was gone. But in her absence, new questions came rushing in.

"It became such a media frenzy because the story kept getting stranger and stranger," said WGN News Reporter Lourdes Duarte. "You were almost glued to the TV to see what's going to happen next."

"Larry King Live," "The Today Show," Drew Peterson was everywhere, even participating in a radio promotion called "Win A Date With Drew Peterson." But all that attention may have backfired.

"And then Mark Fuhrman was in town I believe, and kind of investigating some of this," said Norma Peterson. "I think that started all the attention, going 'Hey! So he's got a fourth wife who is missing and a third wife who is gone. So maybe we should take a deeper look into this.'"

Six feet deeper to be exact.

"At one point the family was able to work with a private doctor, and they were able to exhume her body, and that's when they found so much more to this story," said Reporter Lourdes Duarte.

"The day Kathleen was exhumed, we were asked to go to the coroner's office," said Susan Savio Doman, Kathleen Savio's sister.

Once there, they were met by renowned forensic pathologist Dr. Michael Baden, famous for testifying in a number of high-profile murder trials, including O.J. Simpson's and Phil Spector's.

"And he said Kathleen was murdered," said Susan.

According to Dr. Baden, a number of deep bruises indicated an extreme struggle in the hours before Kathleen's death.

Drew Peterson retired from the police force not long after that. But far from lying low, he continued his bizarre on-camera behavior.

Drew's sister-in-law Norma Peterson tells Crime Watch Daily that behind closed doors, the family had an arrangement not to say anything.

A few months after Kathleen's death was changed from accident to homicide, the former police sergeant was pulled over while driving and arrested.

At trial, a number of people testified, including Pastor Schori, who said what Stacy had told him about Kathleen. That, along with evidence investigators said proved Kathleen was killed, and her crime scene staged, was enough for the prosecution to rest its case. The jury deliberates, and he's found guilty of murder. He continued to deny that he killed Kathleen.

Drew Peterson is given 38 years behind bars for the murder of Kathleen Savio.

But where one family has answers, another has none.

"Stacy is still missing. We still don't know anything else about her whereabouts, and it's been nine years," said Lourdes Duarte.

Former Police Sergeant Drew Peterson has been convicted of murdering his third wife. But even from behind bars authorities say this ruthless killer has another target in his sights.

Drew still contends Stacy ran off with someone else, abandoning him and their kids.

But in the days after Stacy's disappearance, reportedly, Drew's stepbrother helped him move some sort of large container out of Drew's bedroom. Drew denied that happened.

Crime Watch Daily tracked that stepbrother down, but he wasn't willing to go on camera at this time.

Drew was questioned, his house was searched, but there's still no sign of Stacy, and he maintains he's innocent.

Drew Peterson's latest attorney Steve Greenberg is in the process of appealing Drew's conviction for the murder of his third wife, Kathleen.

Crime Watch Daily sat down with Greenberg, and asked about Will County State's Attorney, James Glasgow, often seen in front of cameras as the stern counterbalance to Drew Peterson's antics.

Peterson was caught on tape talking about Glasgow from behind bars. Turns out that Drew Peterson was trying to hire a hitman to take out the prosecutor. But there was a little problem with his go-between.

"That inmate was wearing a wire and was able to turn this information over to authorities," said reporter Lourdes Duarte.

Peterson is convicted and given an additional 40 years behind bars.

Drew Peterson now spends his days behind bars after being convicted of murdering his third wife. His fourth wife is still missing. But in the wake of Stacy Peterson's disappearance, her sister-in-law Norma Peterson is championing a new program created to help empower victims of domestic violence.

An evidentiary abuse affidavit is a file victims can create online at Document The Abuse that serves as a sort of drop box for all of their evidence of abuse.

"What it does is it in some ways gives the victim a sense of 'OK, if anything happens to me hopefully the person the perpetrator will be held accountable,'" said Norma Peterson.

And where the program is being implemented, it's already making a huge difference.

"I've used it quite a number of times right here," said Pastor Neil Schori. "In the community and actually around the nation who have been abuse victims, and not one person that we've done evidentiary affidavit of abuse with has disappeared. I think that's powerful so its hope for victims."

And from the women still in drew's life, a few parting words.

"Give it up game over," said Cassandra Cales.

"There are four children who are going through just such an emotional time and they have to look out and see all of this, they didn't ask for any of this," said Norma Peterson.

"You're going to have to answer to God one day," said Susan Savio Doman, Kathleen's sister. "Karma's a bitch."

Drew Peterson has a new legal fight on his hands from behind bars: He's petitioned the police pension board to reinstate his $79,000-per-year payout. His attorney says the money is being used by Peterson's oldest son to raise his family. 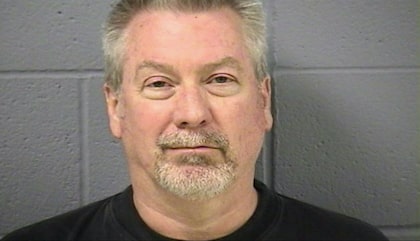