Five years after their disappearance, authorities and family members are still searching for Molly Miller and Colt Haynes, KFOR-TV reports.

Although James Conn Nipp was connected to the case, he was never charged in the pair's disappearance. He was ultimately convicted of running from law enforcement officers, and was recently released from prison.

Joe Russell was arrested in July 2016 for corruption in office, willful neglect of duty and maladministration.

Molly Miller, 17, and 21-year-old Colt Haynes vanished on July 8, 2013. What began with a police chase ends in anguish for family members.

But trying to find out what happened to Molly and Colt uncovers possible corruption from the very top to the very bottom.

The twisted tale of alleged corruption and mystery begins on a hot, sticky, summer night in Wilson, Oklahoma.

"This dark-colored Honda sped into the parking lot and driver of the vehicle spun out his tires, throwing gravel all over the patrol car, and then took off out of the parking lot heading southbound toward Love County," said Justin Brown, special agent, Oklahoma State Bureau of Investigation.

"During the police chase, from my understanding, the sheriff of Love County told a deputy to call off the chase because he didn't want another one of his cars tore up," said Paula Fielder, Molly's cousin.

"Nipp had a history of spinning out his tires in front of police and then running from them," said Justin Brown.

Then as quick as it began, the chase is over. The taillights were spotted by deputies as the car barrels down Long Hollow Road. And where that dirt road dead ends is where the disappearance of Molly Miller and Colt Haynes begins. Unbeknownst to deputies, Conn isn't alone on his joyride. In the passenger's seat is Colt Haynes, a happy-go-lucky guy. And in the backseat was Molly Miller.

News anchor Maureen Kane from Crime Watch Daily affiliate KXII was in the newsroom the day the story breaks.

"We know that on July 7, 2013, James Conn Nipp, Colt Haynes, Molly Miller were all in a car together," said Kane. "According to the affidavit, OHPA troopers say all three of those cellphones pinged in the area of Wilson and Ardmore and that they were all together during that time, during that night."

And that night, just after midnight, the 911 switchboard at the Love County Sheriff's Office lights up.

"There was no information transmitted, it was just a call into 911 and then she hung up," said Brown.

Moments later, more calls to 911 -- more than a dozen coming in every other minute in rapid succession, all dropped calls. All from Molly's phone, according to cellphone records obtained by Molly's family.

Then a call from Colt Haynes. His call goes through.

"Colt called several people," said Monique Stewart, Colt's sister. "I have talked to one of the people that he talked to and he said that Colt told him he was lost in the woods, laying in a creek bed, and he didn't know where he was, and that his ankle was broken and the bone was sticking out."

It's in the early morning hours and Molly and Colt are alive, but lost. Their friends head out, searching for the pair in the woods off Long Hollow Road where Molly and Colt claim Conn dropped them off.

Colt's buddies drive back to town. They don't find Colt and Molly, but they do find Conn -- with no car, no Colt, no Molly, and no answers. Concerned they may be in over their heads, the missing kids' families claim they reach out personally to the Love County Sheriff Joe Russell for help.

"Joe Russell refused to take the report," said Paula Fielder. "He said it wasn't his problem. Just by his actions alone and the fact he wouldn't take a police report. It was pretty quick, we figured out this is something more than just Molly missing."

"It was a big cover-up," said Misty Howell. "It's been a cover-up since day one."

But why in the world would the sheriff of Love County be covering for a criminal?

Conn Nipp, the man driving Colt and Molly the night of the chase, isn't talking. Nipp is a guy with a long rap sheet, and a bad reputation. Family members of the missing couple went to Love County Sheriff Joe Russell for help, but they claim he was trying to cover Conn Nipp's tracks.

"One of the obvious reasons is that he's related to James Conn Nipp," said OSBI Special Agent Justin Brown. "My understanding is that they are cousins."

"Between Conn Nipp and Joe Russell, they had made a name for themselves in a way that makes people afraid of them, afraid of retribution if they tell what they know, that something bad will happen to them," said Jamie Smith, Colt's sister.

But Colt and Molly's families refuse to back down.

Now the Oklahoma State Bureau of Investigation has been brought in to solve this missing-persons mystery and to clean up any possible corruption.

"Sheriff Russell was arrested on some criminal charges," said KXII anchor Dan Thomas. "He's accused of basically letting his son, who has been convicted of meth dealing, deal meth essentially out of the house. Not only that, use the sheriff's vehicle, which is outfitted with lights and a police scanner, to go and deal meth out of that. That's what the FBI claims was going on."

And according to arrest records, the sheriff's cousin, Conn Nipp, is part of that.

The FBI moves in, and their investigation leads to an indictment of Sheriff Joe Russell on several charges, including two counts of corruption in office, and two counts of habitual or willful neglect of duty. There are even allegations of the sheriff bringing young girls in bikinis back to his house, supplying drugs, and getting them to strip.

Molly's family hopes Sheriff Russell's arrest will bring Molly home. And Colt's sister believes this arrest could lead to the break they've been waiting for.

While the sheriff's charges aren't directly related to the disappearance of Colt and Molly, his credibility is certainly being called into question.

Conn Nipp, is also arrested and charged with endangering others while eluding police.

And what does the sheriff have to say now about his arrest, his cousin's arrest, and the allegations from Molly and Colt's family members? Apparently, not much.

"He has literally not only run from me but from other reporters in this newsroom that have tried to talk to him," said Dan Thomas. "Very unusual behavior for that sheriff."

Crime Watch Daily receives information that the sheriff is out of jail while awaiting trial. Recently suspended, Sheriff Joe Russell isn't talking to us, but he will have to explain his actions to a jury of his peers.

Suspended Sheriff Joe Russell remains out of jail awaiting trial on multiple counts, including two counts of corruption in office and two counts of habitual or willful neglect of duty. He's pleaded not guilty. On Wednesday, Oct. 12, 2016, he resigned, KFOR reports.

His cousin, Conn Nipp, has been convicted of possession of a controlled dangerous substance and endangering others while alluding police. He was sentenced to 10 years in prison.

Nipp remains quiet about the night he took Molly Miller and Colt Haynes on a police chase down Long Hollow Road, never to be seen again.

"I would like to say to anybody that knows what happened to come forward, say something. Just tell us where they are, we just want to bring them home. We can't live like this anymore," said Colt's sister Monique.

Facebook pages have further information on the search for Molly Miller and Colt Haynes .

Anyone with information related to the case is urged to contact the Oklahoma State Bureau of Investigation . 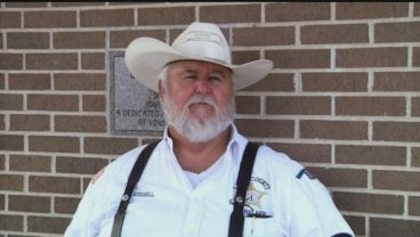