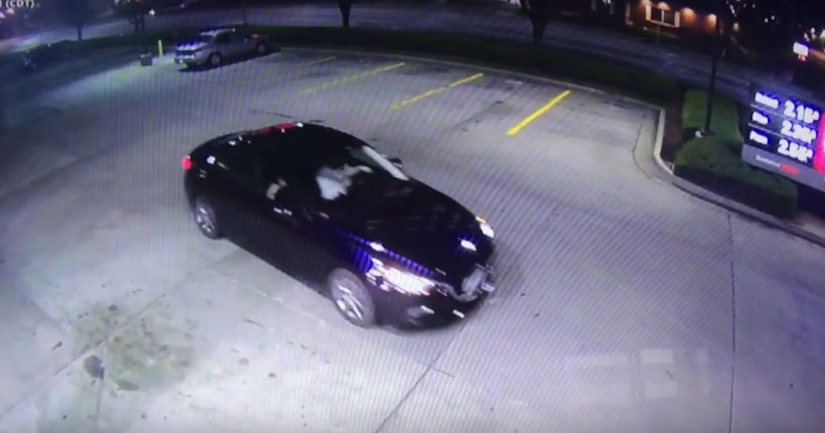 OLATHE, Kan. -- (WDAF) -- The Johnson's County Sheriff's Office is asking for the public's help in the search for a vehicle believed to be used in a kidnapping and sexual assault case.

The vehicle is a possibly newer model Mazda 4-door or similar body styled make and model, dark blue in color.

Police said around 11:30 p.m. Friday the car was seen in the area of 101 N. Kansas Avenue in Olathe, in a parking lot adjacent to the Johnson County Sheriff's Office Adult Detention Center.

An occupant of the vehicle, described as a white male, reportedly forced a female deputy into the car against her will in the parking lot as she walked to work at the facility.

Police said the deputy was sexually assaulted before later escaping from the vehicle at 1:30 a.m. Saturday near Interstate 470 and Woods Chapel Road in Lee's Summit.

Johnson County Sheriff Frank Denning held a conference where he said the deputy was going to work at the time. He said she had parked her car where the majority of employees park and was walking toward the facility when she was attacked. Denning said he believes she did not have a weapon with her at that time.

Denning said it appears the suspect(s) had been following the deputy for some time prior to the assault.

"It appears from some of the video footage that we have, there on Santa Fe, that the car was following her from about an area of Santa Fe and Ridgeview to the parking lot at the detention facility, and that would be probably a little over a mile," Denning said.

Denning said police are looking for two people that were in the vehicle.

The deputy, who Denning said has been with the sheriff's office for about six months, has been meeting with criminal investigators and was treated at the hospital.

Denning said in his more than 40 years on the force, he has never seen a case like this.

"As the sheriff, you feel responsible for your employees anyway, and for something like this to happen that is -- it's very tragic to see the least -- but just to have a young person, a young woman assaulted like that it makes me angry," Denning said. "We're going to find out who these two are."

He said going forward, his office is looking to see if there are any possible extra security measures that need to be taken.

The sheriff added that even with upgrades, there is always the possibility of danger in law enforcement.

"We are the protectors, so I guess, you know, you take a lot for granted, at least I did, that given those situations that we can handle it, but the bottom line is we are all vulnerable, male or female," Denning added.

The sheriff said after the deputy was able to escape the vehicle, she was "very close to a Jackson County Sheriff's Office substation, and so she went there."

The vehicle appears to have both a front and rear license plate, police said, although the number is not available at this time.