LINDEN, N.J. -- (WPIX) -- Ahmad Khan Rahami, wanted in connection to explosions in Chelsea and New Jersey, is in custody following a shootout with police that ended with two officers being injured, a top law enforcement official said.

A second person has also been detained by Union County and Linden police departments in connection to the bombings, officials tweeted.

Rahami was detained following a shootout that resulted in two officers being injured in Linden, N.J., the local mayor confirmed shortly after 11 a.m.

The NYPD later confirmed his arrest.

Images of the scene showed Rahami on the ground and apparently injured.

In addition to the two injured officers, one of whom was shot in the vest and the other in the hand, a person described as a "suspect" was shot and a third person was hurt.

Rahami was initially identified Monday morning as a person wanted for questioning in connection to a bombing in Chelsea on Saturday that resulted in 29 people being injured.

Within hours agencies said the Chelsea explosion was likely linked to two others in New Jersey's Seaside Park and Elizabeth communities, and CNN reported Rahami was also wanted in connection to those blasts.

Prior to his capture, the New Jersey man was considered "armed and dangerous," according to the FBI.

Rahami is of Afghan descent and his last known address was in Elizabeth, New Jersey, according to the FBI.

The wanted man is a naturalized U.S. citizen. 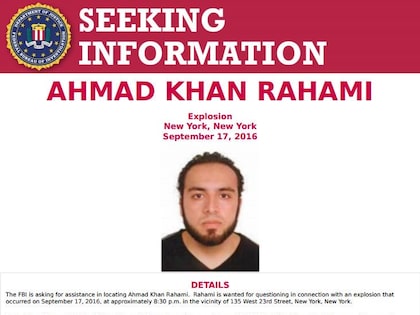