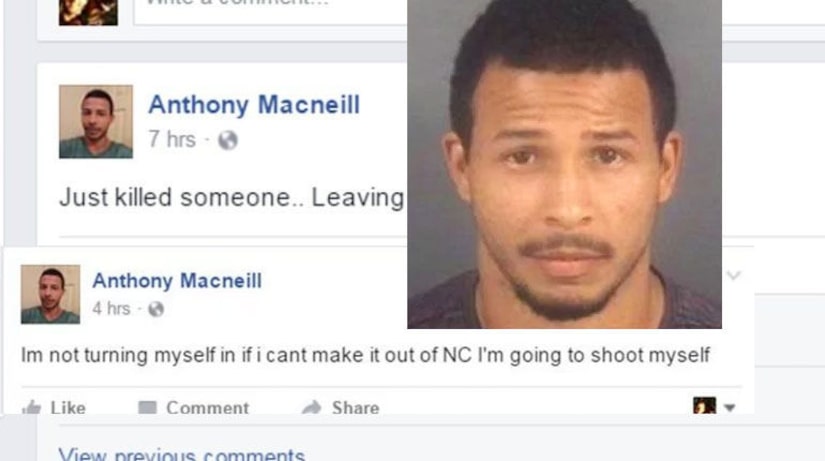 FAYETTEVILLE, N.C. -- (WGHP) -- A North Carolina murder suspect who posted about his crime to Facebook has been found dead, according to WTVD.

The Cumberland County Sheriff's Office says a body found behind a vacant house Wednesday on Radcliff Court, north of Fayetteville, has been identified as 32-year-old Anthony Curtis Macneill.

WTVD reported that Macneill had been accused of shooting and killing his child's grandfather and posting about the incident to social media.

The body was found just a few blocks away from where Eugene Racine was shot and killed Sunday. Deputies said Macneill shot himself.

Macneill posted on his Facebook page Sunday morning that he had “just killed someone.” He had been on the run since then.

Deputies received a call about a domestic situation Sunday morning in the 6600 block of Wake Forest Road in the College Downs Subdivision in northern Fayetteville.

The caller told authorities someone had been shot. When deputies arrived, they learned Macneill had allegedly killed Eugene Racine.

Macneill is the father of Racine's grandchild, according to the Cumberland County Sheriff's Office.

Macneill posted on his Facebook page multiple times while police searched. He told his followers he was leaving North Carolina, and threatened suicide.