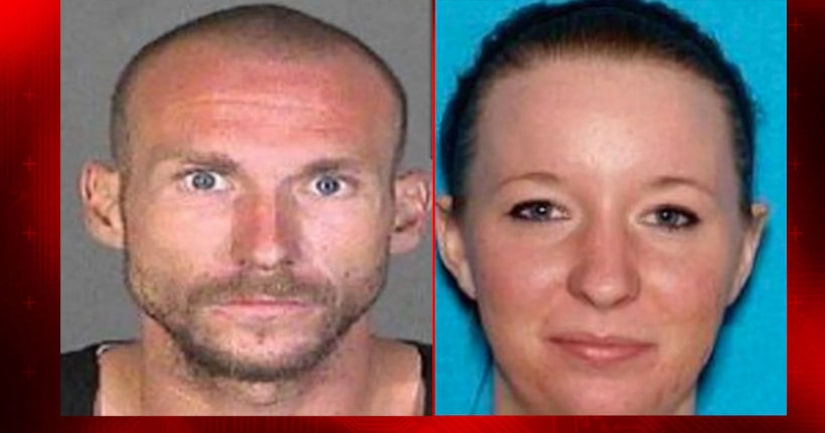 LOS ANGELES -- (KTLA) -- Three young children whose mother was found dead on a Gorman-area road were located safe Wednesday afternoon after they were kidnapped, but the two people suspected of taking them remain on the run, authorities said.

The three missing kids were found at a motel outside Albuquerque, the department said shortly after 3 p.m. Robertson and Humphrey left them in the care of a good Samaritan, who alerted local law enforcement.

The Sheriff's Department is coordinating with the Department of Children and Family Services to have the children safely returned to California, authorities said.

A warrant has been issued for the couple's arrest, the release stated. The warrant is for the kidnapping, though Mendoza said the pair are also wanted for questioning in connection with the homicide.

He described them as "persons of interest."

“Due to the fact that immediately after the murder – or sometime shortly after – it is suspicious that they did not come forward to law enforcement, and instead they fled,” Mendoza said.

Harvill's body was found in a desolate area by a motorist in some brush near Gorman Post Road north of California State Route 138 on Aug. 14.

She suffered trauma to the head and was pronounced dead at the scene, according to the Santa Clarita Valley Sheriff's Station. A handgun was used in the killing, Mendoza said.

Officials could not identify her initially, but later figured out who she was from her unique tattoos, according to the Sheriff's Department.

Robertson has a criminal history and was previously arrested for possession of a firearm, the release stated. He was on post-release community supervision at the time of the kidnapping.

He and Humphrey are believed to be driving a forest green or silver-colored 1999 Ford Expedition that may have the California license plate No. 7BEK024, or paper plates.

Robertson also has an infant minor in his care who is not related to the other children.

Authorities think thought they were headed eastbound on Interstate 40 through Arizona toward the New Mexico area before it was learned that they stopped in Albuquerque. It is believed they are headed eastbound to neighboring states, according to the Sheriff's Department.

Between the two, they have relatives in Nebraska, and ties to Kansas, Louisiana and Mississippi, according to Mendoza.

The suspects are considered "armed and dangerous," the release stated. Anyone who sees the pair should not approach them and should call local law enforcement or 911.