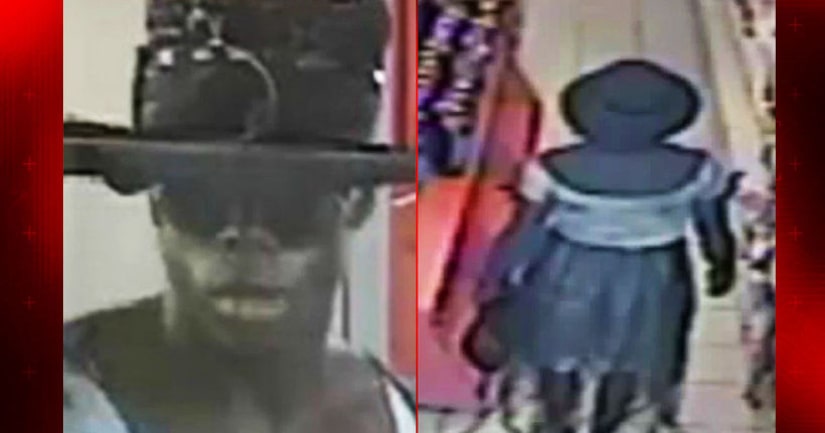 STAPLETON, Staten Island -- (WPIX) -- A cross-dressing bank robber who donned a silver and black formal dress, silver high heels, a black hat and sunglasses to rob a beautiful landmarked bank in downtown Staten Island Monday is being sought by the New York Police Department and the FBI.

Investigators say the unidentified man also displayed a silver handgun -- that matched his outfit -- during the robbery around 1 p.m. at the Santander Bank at 81 Water Street.

Witnesses describe the robber as a man dressed in a silver and black formal dress, silver high heels, wearing a black hat and sunglasses.

He was later seen on surveillance video in a nearby store pulling off the skirt, and was then seen wearing plaid shorts, blue and white Nike Jordan sneakers and no shirt.

The faux female strutted half a block on water street to this convenience store where a different surveillance camera caught his next act.

According to an FBI spokesperson, the cross-dressing robber came in to this nearby deli and changed out of his dress. They're hoping someone saw him disrobe.

Our muscular bandito leaves topless in plaid shorts and no visible tattoos.

He's believed to be approximately 5 feet 8 inches to 5 feet 10 inches tall, about 175 pounds, and may have scarring around his mouth. The man didn't appear to have any visible tattoos.

Investigators say the man should be considered armed and dangerous.

The FBI is offering a reward of up to $5,000 for information leading to an arrest in this case.