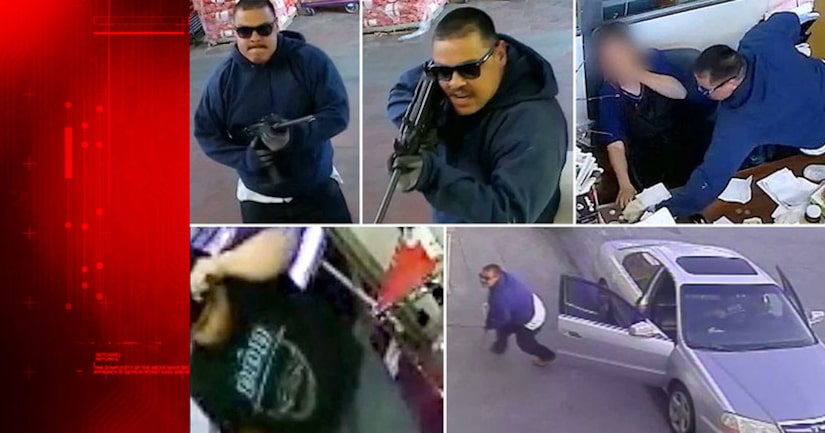 WARNING: The below video may be disturbing to some viewers.

Police said the robbery happened on April 23 at around 7:39 p.m. at HP Foods, located at 830 S. Third Street. The two suspects went into the business, one armed with a long-barreled Uzi sub-machine gun, assaulted the employees, and took cash and personal items from the victims, police said.

The suspects ran away from the scene and have not been identified, according to Sgt. Enrique Garcia.

The first suspect is described as a Hispanic man, around 30 to 49 years old, about 5 feet 10 inches tall, weighing about 200 pounds, and with black hair and a mustache. He was wearing a white undershirt, blue hooded shirt, brown boots, and black pants, police said.

Police said the first suspect was armed with the sub-machine gun.

The second suspect is described as a Hispanic man, about 20 to 35 years old, standing 5 feet 10 inches tall, weighing about 200 pounds, with black hair. He was wearing a black shirt with “DBD” on the front, gray sweats, a black ski mask, and gray tennis shoes.

The suspects sped off in an early 2000s silver Acura TL with no front license plate, Garcia said.