A video going viral shows a woman getting the ultimate revenge on a man she says has been harassing her. And apparently -- she's not alone.

Cellphone video shot by a woman who says she was targeted shows Jeffrey Polizzi approaching her in a Florida Target store.

He starts by asking shopper Candice Spivey a seemingly innocent question about a dress for his wife.

"At first he is very believable. At first he'll come up to you and he does seem like he genuinely needs your help in regards to just answering some questions about a dress he bought for his wife," said Candice Spivey.

"I was going to get like a backup here, I want to make sure it's not too sheer or clear," Polizzi tells Spivey.

Turns out the guy's hit up Candice before. She says she recognized him immediately from a previous interaction two years ago.

But on this day, when she pulls out her phone and starts filming, Polizzi bolts out the door.

Incredibly, while making a run for it Candice says Polizzi had the nerve to tell her to quit following him.

"He said 'Get away from me' or 'Stop, leave me alone' or something, and that's when I just wanted to say, 'No, you need to leave everyone else alone.'"

Candice puts her video on Facebook, and the clip goes viral, viewed more than 1.5 million times and shared by more than 24,000 people in a matter of days.

After posting his picture, scores of women say they recognize the so-called "Target Troll."

"He realized he had messed up, and that's when he turned around and took off running, I chased him because I wanted to get information on who he was," said Candice. "I wanted the public to be aware of him."

Even the Nassau County Sheriff's Office posted "OMG, so many! Y'all please contact Det. Kelley, we want to keep a record. We appreciate it if you do."

It's not the first time Polizzi has struck.

Police say Polizzi was arrested in 2009 for hiding a camera in his shoe, putting it under dressing-room doors and recording women changing.

He also filmed up women's skirts and was charged with video voyeurism. He pleaded no contest and was sentenced to four months in jail.

So shoppers beware, because you never know who's lurking where you least expect it. 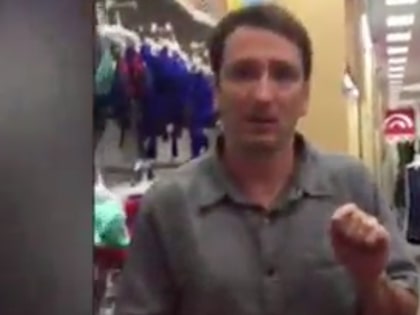