A Crime Watch Daily Update on the murder of Lea Porter, the Colorado woman killed by her high school friend, Christopher Waide.

Waide's criminal justice teacher says he's concerned the killer may have learned how to commit this horrible crime in class.

Robert Wells didn't know it at the time, but his knowledge of his former criminal justice pupil Christopher Waide would soon make him a key player in the search for missing teenager Lea Porter.

"If there's any way to find and bring her home, that's why I'm involved," said Wells.

"[Waide] always pulled straight A's in all of his classes," said Wells.

But Wells, a former federal agent, was horrified to learn he may have unwittingly taught his favorite pupil how to commit a more perfect murder.

"It bothers me a great deal," said Wells.

So now Wells is trying to end his own sleepless nights and the torment of a young murder victim's family. He's personally taking on the task of finding the final piece to the puzzle of Lea Porter's murder. Where is her body?

"I'm upset about this to a point where I want to find out for myself," said Wells.

While police were able to catch, convict and put Christopher Waide behind bars for Lea's murder, the location of her body remains a mystery that haunts her mother Rene and big brother Maxx to this day.

"I want her found more than anything else in this world," said Maxx. "I would give up my own life to find her now."

Lea had always been the apple of her mother's eye, a smart, fun-loving kid who grew up in the little town of Pueblo, Colorado. But like a lot of good kids, Lea fell in with a bad crowd as a teenager, developed a heroin habit and turned into a different girl, eventually quitting college and leaving home at 19 to try to beat her addiction and make a fresh start.

Lea's world had suddenly fallen apart. So she decided to start over in Denver, where an old friend named Christopher Waide had offered her a temporary place to stay. But it would not turn out as Lea had expected.

And her family would never see nor hear from her again.

Lea's worried mom called Waide, who told her she had left the same day she arrived.

And when mom Rene reported Lea missing to police, Waide told them the same story, with more details.

"Waide seemed to be co-operating with the police. He even led the search to find his young friend, placing numerous items about her disappearance on his Facebook page, including missing persons posters seeking any information on her whereabouts."

Which fits with how Waide's criminal justice teacher Robert Wells remembers him as a student at Everest College in Denver.

"I thought he was a good-hearted, well-meaning young man," said Wells. "It was classic Christopher Waide. He wanted to be the knight in shining armor."

But police discovered Waide had some dark secrets, among them that he'd been discharged from the Army after telling psychiatrists he had fantasized about breaking into houses and raping and murdering women.

And a second police search of Waide's apartment uncovered child pornography on his computer, which rings another bell with Robert Wells.

"I think he'd actually done a paper on child pornography, sex-trafficking, that type of thing, if my memory serves me correct," said Wells.

Police would also find a duffel bag full of women's underwear in his closet, and a lot of blood on the floors.

"He poured bleach and we were able to get DNA samples and blood from outside of those bleach spots, and then on his mattress we found several large pools of blood mixed with bleach," said Westminster Police Detective Matt Calhoon.

That sends chills down Wells's spine.

Do you think he used what he learned in his class to commit this crime?

"Talking to authorities it appears as though he may have," said Wells. "We talked about certain ways that perpetrators can go in and commit a murder, using bleach to clean up blood and crime scenes to make it hard for the forensics to get a good identification on the subjects or victims or the perpetrators."

Waide also learned police couldn't match blood to a victim without a body.

"So it appears that he could've used some of the things that we taught in our classes," said Wells.

But suddenly cops think they may be about to find that body when it's discovered Lea's cellphone is emitting signals from the vicinity of a local landfill.

"We moved about 50,000 tons of debris," said Detective Calhoon. "All the officers in the department basically worked 12-hour shifts and we had 20-plus officers out there at any given time working six days a week, 10 hours a day."

"Police scoured this landfill and found all of Lea's personal belongings, including her wallet, cellphone, clothing and jewelry," said Wells. "The only thing they couldn't find was Lea."

Lea's family and the cops were sure Waide had killed Lea. But without a body it was going to be hard to prove in court.

"In all, no-body homicides, it's easy to put doubt in a juror's mind that 'What's the chance that Lea runs through the door,' and then what? Are you going to convict this guy of murder without ever seeing the body?" said Calhoon.

What police didn't know was that Lea's older brother Maxx had been working the case on his own, befriending Waide.

And Waide ended up meeting Maxx and three of his friends in a park, where Maxx confronts him point-blank about murdering his sister.

Unaware Maxx is recording the conversation on his cellphone, Waide admits he killed Lea, saying she tried to stab him with a knife when he refused to get her drugs after they'd had sex in his apartment.

Waide says Lea attacked him, and he admits to tussling with her, squeezing her throat and cutting her, and says she died.

"I put a bag over her head and then I placed two on top of her," Waide says in the recorded confession. "I had used some rags to clean up the blood and put those into a grocery bag, and I put that into the duffel bag with her. I did the only thing I could think of, and God help me, I put her in the Dumpster."

Waide called 911 himself after the confrontation with Maxx. Then after hearing about the confession from her son, Rene also called 911.

Waide would later repeat his confession to police. He is now spending 48 years behind bars after pleading guilty to second-degree murder and other charges.

Which is why Rene reached out to Wells, a 23-year federal law enforcement veteran who now heads an organization called Families of Homicide Victims and Missing Persons, which focuses on solving cold cases.

"And ironically I just happen to be the killer's instructor of criminal justice," said Wells.

Wells believes that gives him a better chance than anyone of getting the truth out of his former pupil.

"And I'm hoping I can reach out to him and get the rest of his story," said Wells.

Neither the police nor Lea's family believe Waide's claim that Lea tried to stab him and that he killed her in self-defense.

But Wells never saw any sign that Waide could be capable of murder when he was teaching him criminal justice.

"There was not one thing that jumped out at me that rose a red flag when it came to Christopher Waide, and I keep looking back and trying to re-evaluate, and I still to this day couldn't find anything that would be a marker," said Wells.

Wells believe Lea's murder must have been a spontaneous act.

"Something had to trigger such a violent act and I'm hoping to be able to figure out what that is eventually," said Wells.

Rene and Maxx don't believe Waide's story that he disposed of Lea's body in the same Dumpster he put her belongings.

"I don't believe she's in that landfill," said Maxx.

"I got a feeling that sooner than later the rest of the story's going to come out," said Wells.

If only Robert Wells can persuade Christopher Waide to talk to him.

"And I'm going to use my best efforts to bring her back to the family if it's at all possible," said Wells.

Crime Watch Daily and Robert Wells have reached out to Christopher Waide in prison, and we're hoping to get permission to interview him in the near future.

To donate to help her family raise money for the search for Lea, visit GoFundMe: Help Find Lea Porter 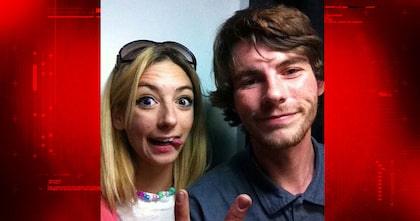