It's hard to believe it's been 17 years since two students stormed their Colorado high school and opened fire. April 20, 1999 was a day that changed America.

Two crazed gunmen in trench coats, armed to the teeth, first randomly shooting outside, and now inside the school on a murderous mission to kill, a horrifying event that wouldn't end for 49 excruciating minutes.

11:23 a.m. -- Lunchtime in the crowed cafeteria. Panicked students are under tables hiding for their lives. The gunmen approach, killing two students near the doorway and injuring six more.

11:29 a.m. -- The shooters calmly walk into the library and start to unload their weapons again. In the library seven minutes would pass like an eternity: 420 seconds of sheer terror on 4/20.

11:40 a.m. -- Terrified students escape the bloodbath, running for safety from any open doors or windows, their hands on their heads.

12:05 p.m. -- A hastily arranged news conference to try to explain the unexplainable. The number of fatalities is still unconfirmed as the gunmen remain at large in the bloody high school library.

As news of the attack breaks, the images are beamed across the country. Frantic parents arrive, waiting in agony waiting for information about their children.

12:08 p.m. -- A teacher hears the suspects shout in unison, "One, two, three." Then the sound of gunfire. The sick gunmen take their own lives.

When the carnage is over, 13 others are dead, and a town is in shock and in deep mourning.

Within hours, police identify the suspects: Two deeply troubled teens who shot home video of themselves at target practice with high-powered weapons, practicing their violent plans right before the massacre -- Dylan Klebold and Eric Harris.

But in the depths of the senseless violence, there are selfless acts of heroism. 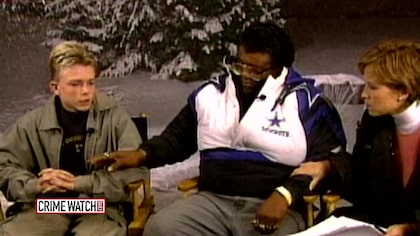