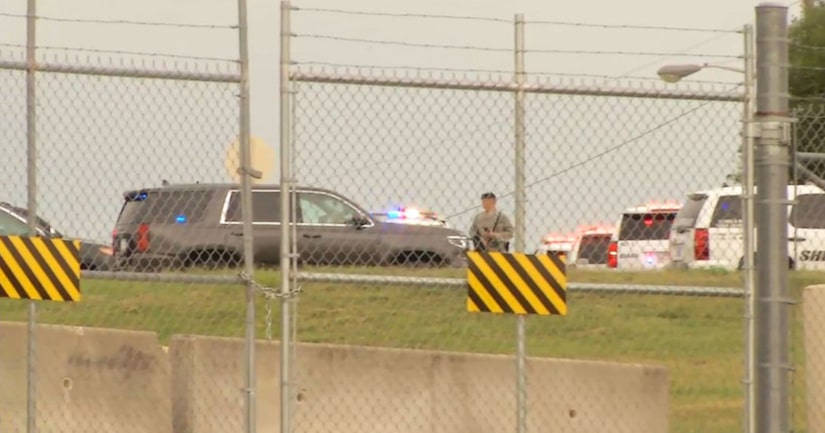 SAN ANTONIO -- (KABB/AP) -- An airman shot his commander in an apparent murder-suicide Friday at the Lackland Medina Annex during an active shooter situation on Friday morning, a senior U.S. official said.The official spoke on condition of anonymity because he wasn't authorized to publicly discuss the shooting at Joint Base San Antonio-Lackland.

Two handguns were found near the bodies of the men, which were inside a building that's used for classrooms and offices, according to Brig. Gen. Robert LaBrutta, who oversees Joint Base San Antonio. He stressed that the shooting was not an act of terrorism, and declined to identify the two, saying their families must be notified first. The Air Force's Office of Special Investigations is leading the investigation, and the FBI is assisting.

Lt. Col. Bobby Ford said emergency crews responded to the situation within three minutes of the initial call. Eight minutes later, they found the bodies of two people on a first floor of building 147, which is located on the Lacklack Medina Annex.No other victims were located during the search. An immediate lockdown was put in place while officers from the Bexar County Sheriff's Office and the San Antonio Police Department began the process of clearing buildings.

The fatal shooting of the two is the latest to occur at a military facility in Texas in the last several years. In January 2015, an Army veteran and former clerk at the veterans' clinic at Fort Bliss in El Paso shot and killed a psychologist, then killed himself. About a year earlier, three soldiers were killed and 16 wounded in an attack at Fort Hood near Killeen by Army Spc. Ivan A. Lopez, who also killed himself. And in the deadliest attack to occur at a U.S. military installation, 13 people were killed and 31 were wounded in a mass shooting in 2009 at Fort Hood. Nidal Hasan, a former U.S. Army major, was convicted and sentenced to death in that shooting.

Joint Base San Antonio-Lackland is the home of Air Force basic training. The Army's Fort Sam Houston and Air Force's Lackland and Randolph bases were combined during base realignment several years ago to become the military's largest joint base.