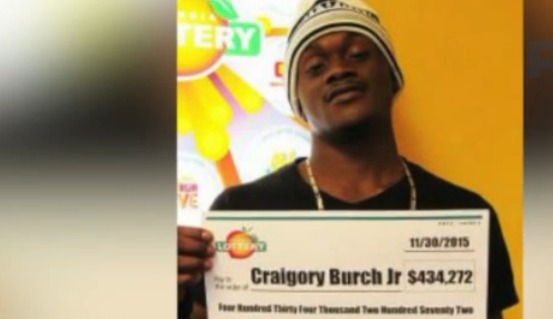 WGN
WGN - "Ever since he hit the lottery we kept getting calls, text messages, all that, saying, 'Be careful because people are out for him to rob him,' Hendricks said."

Five Georgia men – Earnest Holcomb, 27; Wayan Jordan, 17; Nathaniel Baker, 28; Anjavell Johnson, 21; and Dabrentis Overstreet, 19 – along with two women, 22-year-old Rosalyn Swain and 24-year-old Keyona Dyous, all face charges of malice murder, armed robbery, aggravated assault and possession of a firearm during the commission of a crime, according to WALB.

Friends and family say Craigory Burch Jr., 30, was targeted because he won $434,272 in late November.

The victim’s girlfriend says a shotgun blew open the door and three masked, armed men ran inside their home.