The Los Angeles County District Attorney's Office made history with the prosecution of Lisa Tseng: It's the first time in the United States that a doctor has been convicted of murder for overprescribing medication.

Kelly Moreira heard some of the last breaths ever taken by her longtime boyfriend Joey Rovero.

But the affable, ambitious Arizona State University senior would never wake up. Roommates discovered his body hours later, lying in bed with no sign of life.

"We couldn't have been more shocked. It was just like a brick hitting you," said April Rovero, Joey's mother. "What in the world? How could this be?"

Joey Rovero was murdered. Not in a typical way, and not with the typical kind of lethal weapon. And in this case, the perpetrator is a 46-year-old mother of two, 460 miles away in Southern California.

When Joey Rovero joined a fraternity at Arizona State, his mother April suffered the typical anxieties of any concerned parent sending her son off to school.

"That put me on high alert because all the stories you read about the partying that goes on," said April.

Kelly Moreira was also an Arizona State student, where she soon made a glaring observation.

"Every party I went to, people were crushing up painkillers and snorting them and drinking," said Kelly.

Pill-popping has been part of the party curriculum for ages, but these days scores of buzz-seeking students are chasing a far more potent high with a trifecta of highly addictive pills.

"It's called the 'holy trinity' on the street," said April.

"It's known as a cocktail because of the attributes when you take them how high you can get," said L.A. County Deputy District Attorney John Niedermann. "So the opiate gives you that sort of heroin high, the muscle-relaxer boosts it so it's an amplifier, and then your benzodiazepine creates a nice soft landing so that you don't crash when you're coming down off the opioid."

Some, like Joey Rovero, were occasional users -- others are downright addicted, unable to break the insidious habit. And that habit can break a college student's bank. The pills often sold for $80 per pop. Still, the demand for the dangerous cocktail was exploding, not just at Arizona State, but on campuses all over the country.

Getting access to the highly regulated prescription pills was no easy task -- unless you knew Dr. Lisa Tseng, a Taiwan-born American-educated doctor of internal medicine who ran a modest clinic in a mini-mall in Rowland Heights, California, near Los Angeles.

"We talked to a lot of her patients and kids who said they heard from other kids in high school, from other kids on the playground, kids in the parking lot, that this was the place to go," said Niedermann.

Nestled in a predominantly Asian community, the clinic catered to a crowd that stood out to the locals.

"The average demographic for her patients were generally white males 18 to 23 years old, affluent, coming from outside the county to get the prescriptions," said Niedermann.

Tseng ran the quintessential "pill mill," and they came from miles around.

"There were lines out the door of 20-something kids waiting at this clinic in Rowland Heights," said Niedermann. "It was like wildfire. It just spread so quickly, then you realize just how much money you can make off this."

Joey Rovero heard about Dr. Tseng, and trekked across the Arizona desert to California, hoping to score pills for himself and his friends. In a matter of minutes of visiting Dr. Tseng, he had his stash.

"He wasn't X-rayed, not examined, and he came out with an unheard of combination of drugs," said girlfriend Kelly Moreira.

"She gave him oxycodone, which is one of the highest Schedule-2 narcotics that you can prescribe," said Niedermann.

Tseng threw in a muscle-relaxer and an anxiety-reducer: Three potent drugs, 120 pills, one visit. It was a prescription for death.

"His body was not tolerant of this combination at all," said April Rovero. "It didn't take much to kill him."

Investigators would learn Tseng's cluttered little pill factory was in fact a house of addiction, overdose and death. It's hard to fathom, but 12 young patients died under Tseng's care in a three-year period. One patient collapsed at her feet inside the clinic, prompting a call for an ambulance.

Tseng was not inclined to care about the overdoses, just the dollars.

"During the time she was receiving notifications that patients were dying, her prescription-writing went through the roof," said Niedermann. "Her state of mind is not only 'business as usual,' but 'business is booming.'"

State and federal investigators swooped in to take a hard look at the notorious doctor. They would find that Tseng wrote an astonishing 27,000 prescriptions in three years, raking in $5 million. It was sheer volume that helped line the pockets of her lab coat.

"Sometimes the encounter lasted minutes before they walked out with a prescription. Sometimes three or four would go in the same exam room with her," said Niedermann. "There's no doubt that she fabricated records."

Agents went undercover to catch Tseng in the act.

"Basically seven of eight agents were able to walk out with a prescription for a controlled substance," said Niedermann.

Investigators were stunned at the condition of Tseng's clinic.

"There was smoke coming out of the bathroom, there were discarded needles in the trash can, people drugged out of their mind, making deals in the reception area," said Niedermann. "It looked like a shed that hadn't been cleaned out in 20 years."

The Los Angeles District Attorney's Office knew it had a strong felony case against Tseng for overprescribing -- but the D.A. was about to do something risky and incredibly rare.

In a stunning legal move, Tseng was charged with three counts of second-degree malice murder under the theory that Tseng knew her actions were so reckless people could die.

"At some point we are going to hold you responsible for that person's death," said Niedermann. "You knew it would kill them, and you did it anyway."

Of the 12 deaths under Tseng's watch, the D.A. picked the three strongest cases directly linking Tseng's prescriptions to the patients' overdoses.

Joey Rovero, Steven Ogle and Vu Nguyen were the three victims for which Lisa Tseng would be on trial for murder.

"We knew it would be difficult," said Niedermann. "We also knew that the circumstances of filing murder for someone who simply writes a prescription is a novel one."

But Niedermann was determined to prove Lisa Tseng's recklessness amounted to murder.

"She wrote them a prescription for the very thing that they are addicted to. She shoved them over the cliff," said Niedermann.

The pictures alone left indelible images in the minds of jurors. But it was the testimony of Tseng's receptionist that helped underscore Tseng's callous disregard for her desperate patients, who sometimes waited hours to see her.

"She testified that she overheard Dr. Tseng say 'They're druggies, they can wait,'" said Niedermann.

Tseng's defense attorney, Tracy Green, argued that it's the patient's responsibility not to abuse a doctor's prescription.

"No allegation in this case that any of these patients took it as prescribed," said Green. "We all know they were adulterating it, binge-drinking, taking very large quantities."

But Niedermann insisted Tseng not only unnecessarily overprescribed, but deliberately gave pills to patients whom she knew were addicts.

"It's like someone coming to you who is suicidal and you hand them a gun and you say 'Now don't use this gun,'" said Niedermann.

In the end, the jury found Tseng guilty of 21 counts of overprescribing and three counts of second-degree murder.

"All I was thinking about was the families in the audience," said Niedermann. "I hoped that this verdict, each guilty, softens their heart, gives them a little bean of justice."

After reading an apology to her victims, Lisa Tseng was sentenced to 30 years to life in prison. For this disgraced doctor and mother of two young sons, her first shot at freedom comes at age 72.

Crime Watch Daily spoke exclusively with Tseng's distraught mother after the verdict. She did not want us to use her name. A family member translated:

"She's very kind and very dedicated. She did not murder anyone. She feels that she was set up as the one who will be the example. This is not law, this is not justice. You are killing her. This is like killing her."

"Doctors out there need to wake up and realize you're not going to get away with this," said April Rovero.

The Los Angeles County District Attorney's Office made history with the prosecution of Lisa Tseng: It's the first time in the United States that a doctor has been convicted of murder for overprescribing medication.

The verdict sent a chill throughout the medical professional: Many doctors claiming they fear ever writing another pain prescription for people who really need it.

"We are not witch hunters, we are not knocking on doors," said Niedermann. "If you are doing your job, you have nothing to fear from criminal prosecution."

For Niedermann, who has prosecuted the worst of the worst, it's the Lisa Tsengs of the world who he says must be stopped in their tracks.

"I've prosecuted many murders during my career," said Niedermann. "Dr. Tseng is the least regretful of her actions and has the hardest criminal heart I've come across." 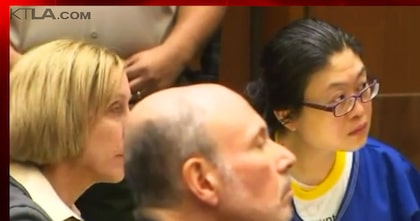 L.A. 'pill doctor' gets 30 to life in triple-murder sentence