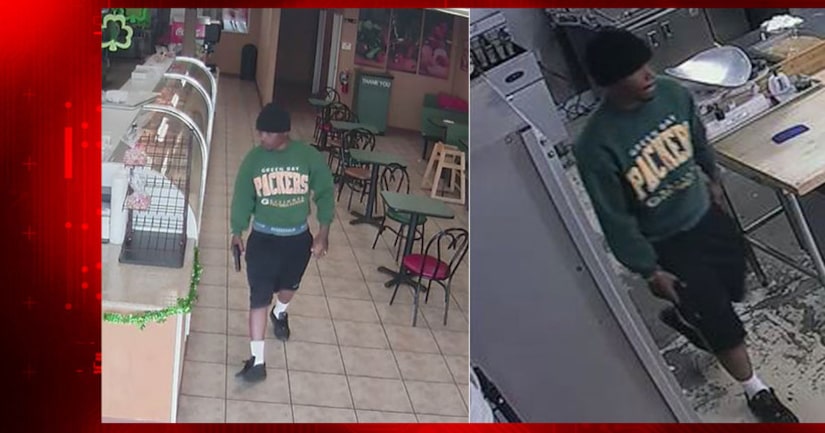 LOS ANGELES -- (KTLA) -- A 20-year-old Lancaster man who was shot dead by a Torrance jewelry store owner during an attempted robbery has been named as a “person of interest” in the double killing of an Apple Valley couple in their 90s, authorities said Thursday.

Keon Bailey is also suspected in a home-invasion robbery and armed robbery of a doughnut store, crimes that occurred in recent weeks in Apple Valley, according to a San Bernardino County Sheriff's Department news release.

Bailey was identified as the man shot dead in a daytime attempted robbery at Leilani's Jeweler's in Torrance on Tuesday, the Sheriff's Department said.

He had been released from state prison less than a month earlier, on Feb. 18.

About 11 a.m. Feb. 28, Bailey was armed with a gun when he robbed Neil's Donuts in the 18100 block of Highway 18 in Apple Valley, the release stated. Surveillance video confirmed Bailey was the robber on Wednesday.

Then, on Feb. 29, Louis Giuntini, 95, and Rose Giuntini, 92, were found dead in their Apple Valley home in the 19900 block of State Highway 18, prompting a homicide investigation. Their cause of death has not been released.

A week later, on March 6, a home-invasion robbery occurred in the 15600 block of Myalon Road in Apple Valley.

Evidence recovered from the three scenes “is consistent in all locations,” the Sheriff's Department said.

Based on the evidence, Keon was described as a “person of interest” in the Giuntinis' deaths, but the news release cautioned that “confirmation of that evidence has not yet been scientifically determined.”

When Bailey was killed during the Torrance attempted robbery, he was found to have stolen property from victims in Apple Valley, the release stated.