"In sum, some of Monson's claims fail and some prevail. Because Monson raises a host of claims and Defendants raise a host of challenges to them, the Court offers a brief recap. Monson's claims against the City of Detroit and the Detroit Police Department are dismissed because they were discharged by the City's bankruptcy. ...

"His1983 false arrest and false imprisonment claims are barred by their respective statutes of limitations. Simon is entitled to qualified immunity on Monson's Miranda claim. And Monson's supervisory liability claim against McKinnon is not plausible. Accordingly, all those claims are dismissed. ...

"However, Monson's remaining 1983 claims against Crockett, Wilson, Simon, Ghougoian, and Braxton survive. And among Monson's state law claims, his IIED claim is dismissed as untimely. The remainder of his state law claims survive."

The 39-page lawsuit alleges Monson’s constitutional rights were violated, and that he was denied access to a lawyer and forced into signing a false confession while being illegally detained by Detroit Police.

UPDATE August 25, 2017: About 20 years after his original murder trial, the homicide case against Lamarr Monson has been dropped, WDIV-TV reports.

Judge Shannon Walker of Wayne County Circuit Court dismissed a first-degree murder charge against Monson after a request by prosecutors due to destruction of evidence and “passage of time,” among other things, the Detroit News reports.

UPDATE January 30, 2017: Lamarr Monson, a Detroit man convicted of killing a 12-year-old girl more than 20 years ago, will get a new trial after his conviction was overturned based on new evidence, WXYZ reports.

Lamarr Monson was convicted of second-degree murder and has been in prison since 1997. The Innocence Clinic at the University of Michigan Law School has been working to get a new trial for Monson.

It's a mindless murder that haunts the Motor City, a miserable end to a short life: Christina Brown was savagely slaughtered at the tender age of 12.

Detroit, once the car capital of the world, skidded into the position of murder capital of the country 30 years ago. And veteran TV crime reporter Bill Proctor covered it all.

"The police failed Lamarr Monson, the Detroit Police most importantly failed Christina Brown," said Proctor. "If they had taken the time to concentrate on another person that they had in the review room, the police department forensically could have followed a blood trail from the murder scene up to Shellena Bentley's apartment.

"He should be paying for it, and not Lamarr Monson." Including the murder of little Christina Brown.

From the get-go, the suspect was 23-year-old Lamarr Monson, the man who used the tiny 12-year-old to deal crack.

By anyone's account, the young girl's death is horrific. Brown was found crumpled on a bathroom floor, covered from head to toe in her own blood. A bloody knife was found nearby. Monson says he stumbled upon the gruesome scene and then went to get help.

"She was still breathing," said Proctor. "He went knocking on doors to try and get help. He waited at the scene, spoke to police about what he had seen, what he had done, his attempt to save his friend."

The case seemed to be sewn up in no time at all. Cops had what they thought was the murder weapon, a knife. And they had their suspect, Lamarr Monson. They got his confession, which led to a conviction and a prison sentence of 30 to 50 years.

For the Detroit police force back then, it's a job well done -- but did they have the wrong man?

Lamarr Monson has been sitting behind bars for two decades now. All that time he claimed he was coerced into signing a typed confession after spending a night in police custody. None of the words, he says, are his -- especially those in the confession that there was a fight, and he stabbed his young friend in the neck and let her to bleed to death.

Lamarr's churchgoing mother, Delores Monson, says her son was set up, and she has faith in his innocence.

Bill Proctor was just days away from retirement after more than three decades of pounding the newsbeat on the mean streets of Detroit. Then, out of the blue, he gets a phone call. It's a woman named Shellena Bentley, and she tells Proctor cops got the wrong guy locked up.

Bentley says she had been trying to tell the police what she had known for the past four years, but she says they didn't want to hear it.

"They just felt like that boy did it," said Bentley. "But he didn't do it."

Shellena Bentley was living in a dilapidated apartment building, now an empty lot, on that dark day when Christina Brown met her murderer.

Shellena has turned her life around. But back then she was a hardcore junkie looking for her next fix. She claims her drug buddy Robert Lewis went downstairs looking to score more crack on credit. Shellena says that's when Lewis ran into Christina, who was all alone.

"When he came back up he had blood dripping off his fingers, he said 'Let's go,'" said Shellena. "He thinks he killed her."

Crime Watch Daily reached out to Robert Lewis by phone. He has denied any involvement in Christina Brown's murder. Indeed, police were skeptical of Shellena's story. After all, she took 16 years to come forward. Shellena says she lived with her terrible secret because Lewis had threatened to kill her family if she ratted him out. She took him at his word.

Proctor said his reporting back then was based on the official police version of the murder. Now he believes the police got it wrong.

Right now in America, the Innocence Project reports at least 20,000 people are behind bars, convicted of crimes they did not commit. And the family of Lamarr Monson says he is one of them.

Lamarr's family does not dispute that he was caught up in a bad scene, doing drugs and sometimes even selling them. But murder -- that was just something he was not capable of doing. And they say they now have the proof.

For 20 years Monson has been in prison for a murder he says he didn't do.

"They escorted us to the police car, and we went downtown for questioning as witnesses," Monson said from prison in a phone interview with reporter Bill Proctor.

"Once I made it to the bathroom, it was like a horror movie," said Monson. "I just was in complete shock. I seen her laying on the floor, she was still alive, she was waving her arms at me. And I immediately turned to have somebody go and call the EMS."

Monson said he thought he was being hauled in to the police precinct as a witness. Then he realized he was a suspect.

"They began to tell the story instead of me telling them what I knew," said Monson. "I agreed to sign at that point, reluctantly."

"Are you telling me that you did not read the document that you signed that sent you to prison for 30 to 50 years?" said Proctor.

"Yes sir," said Monson. "The situation was at this time I was not thinking right at all."

"How would you characterize how you were handled by the Detroit Police?" said Proctor.

"Well I would say that they viewed me just simply as expendable for the purposes of a conviction," said Monson.

Investigative reporter Bill Proctor covered the story 20 years ago while on the crime beat in Detroit. Back then this was just another story. Now Proctor is on a mission to find justice.

"I may be retired, but I can't stop," said Proctor.

When Shellena Bentley found out Monson took the rap, and she had to come forward.

"I just want to tell him and the family that I'm sorry that I waited so long," said Bentley. "There's a man that's in prison for something he did not commit. And it's the right thing to so."

Proctor is on a mission to free Monson. He's teamed up with David Moran, the director of the Michigan Innocence Clinic.

"[Monson was] wrongfully convicted and should be freed as soon as possible," said Moran. "I'm disappointed that he's still in given the evidence that we've found in the last few years of the case."

But what about Monson's confession to the killing?

And then another bombshell: the autopsy reveals the true cause of Christina Brown's death.

"So the confession is that he stabs her to death, but 12 days later the autopsy came back from the Wayne County medical examiners, and it showed that actually the victim was beaten to death," said Moran. "So that is a very strong indicator of a false confession."

In a crime scene photo you can see the ceramic toilet tank lid is missing. Moran says that is the likely murder weapon. Christina had been stabbed as well, but that was not the cause of death. The report shows she had been bludgeoned to death.

"There's not one word in Lamarr's confession about beating his victim to death," said Moran. "If he's the guy who murdered Christina Brown, why would he be the one running around the apartment building frantically saying 'Somebody please call the police'? Why would he stick around? He's dealing drugs at this time. Drug dealers don't normally want to stick around and talk to the police. He stuck around and waited for the police to come."

Moran also discovered that cops had lifted two fingerprints from the toilet tank lid. One matched Christina Brown and the other was a mystery.

It was at the same time that a determined Shellena Bentley reached out to Bill Proctor to tell her story.

"Then our focus shifted from just finding out was there was a fingerprint on the toilet tank, to Did the fingerprint match the man that she named?" said Moran.

A report shows Detroit Police tested the fingerprint in 2015 to see if belonged to Robert Lewis. The result?

Despite new evidence Lamarr Monson remains behind bars. And Robert Lewis is still a free man.

And the Michigan Innocence Clinic has just taken the first step to make that happen, filing a motion to try to get Monson a new trial.

At this time, that motion is in the hands of a judge awaiting a decision.

Crime Watch Daily did contact the district attorney's office for our story -- they declined to do a interview but did say they stand by the conviction.

UPDATE Jan. 30, 2017: Lamarr Monson, a Detroit man convicted of killing a 12-year-old girl more than 20 years ago, will get a new trial after his conviction was overturned based on new evidence, WXYZ reports. 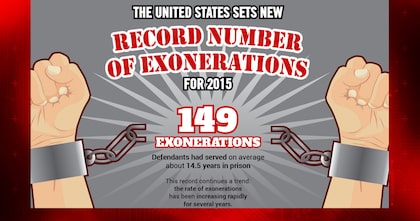