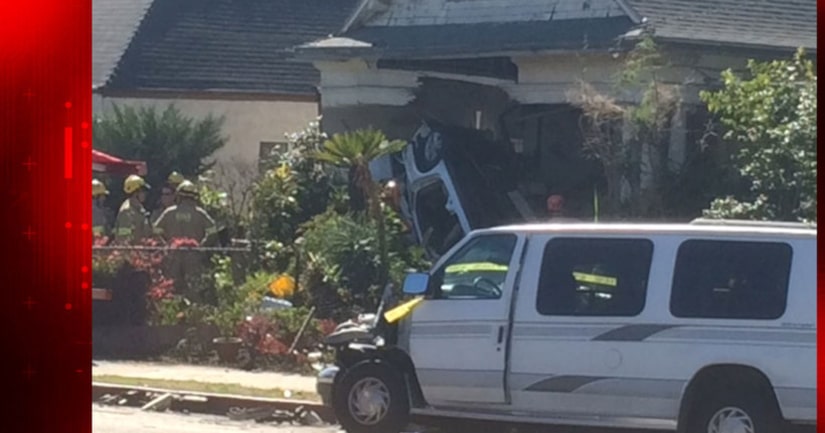 LOS ANGELES -- (KTLA) -- A shooting that ended with a car crashing into a Boyle Heights home, leaving two people dead and another with minor injuries, may have been gang related, authorities said Monday.

The incident began about 11 a.m. Sunday when someone got out of a black SUV and shot into a white car near East Cesar E. Chavez Avenue and Echandia Street, Los Angeles Police Department Sgt. Frank Preciado said following the crash.

Investigators believe the shooting may have been gang related, said Sgt. Minh Nguyen of the Police Department.

After the shooting, the driver of the white car sped away from the scene but careened into the front porch of a home in the 1500 block of Pleasant Avenue -- about five blocks away.

Emergency crews pulled one man from the vehicle and transported him to Los Angeles County+USC Medical Center, where he was pronounced dead.

The driver of the vehicle did have gunshot wounds, Nguyen said Monday.

A woman inside the vehicle was trapped for several hours and was pronounced dead at the scene.

The woman was three to four months pregnant, a third person in the vehicle who survived with minor injuries told police.

Officials have not released the identities of the victims involved in the crash.

The collision was described as "an incredible, violent accident,” by Los Angeles Fire Department Battalion Chief Michael Bowman. The home was "devastated" and will likely be red tagged, Bowman said.

The gunman was described as a slender Hispanic man, standing 6 feet to 6 feet 4 inches tall, and was possibly in his 20s.

He was a passenger in the black SUV, and was being sought by authorities.

A description of the driver was not available.