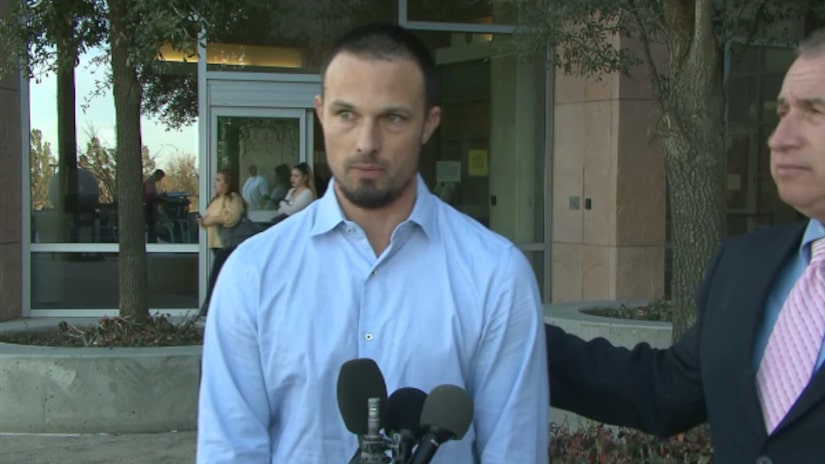 LOS ANGELES -- (KTLA) -- Nearly a year after he was arrested on suspicion of stabbing his roommate at a Santa Clarita-area home, an actor best known for playing a Power Ranger was charged Thursday with murder.

Ricardo Medina, 36, was arrested Thursday morning, and was due to be arraigned Tuesday, the Los Angeles County District Attorney's Office announced.

He faces 26 years to life in state prison if convicted of one count of murder. Prosecutors planned to ask that he be held on $1 million bail.

Medina and Sutter got into an argument over Medina's girlfriend that turned physical, the DA's office said. Medina allegedly stabbed Sutter multiple times with a sword.

Medina called 911 and was initially arrested soon after the killing, but the DA's office rejected the case and sent it back to the Los Angeles County Sheriff's Department for further investigation.

When he was released from the Antelope Valley jail last February, Medina told reporters he was “very, very, very sorry for what occurred.”

Medina's attorney at the time said Sutter was a houseguest in the Green Valley home. After an argument led Medina and his girlfriend to retreat into the actor's bedroom, Sutter forced open the door and Medina stabbed him with a sword, the Sheriff's Department said after the suspect's arrest.

Medina played the red Power Ranger on “Power Rangers Wild Force” in 2002 and in other productions involving the character, according to his IMDb profile. He appeared in the show “Power Rangers Samurai” in 2011 and 2012.