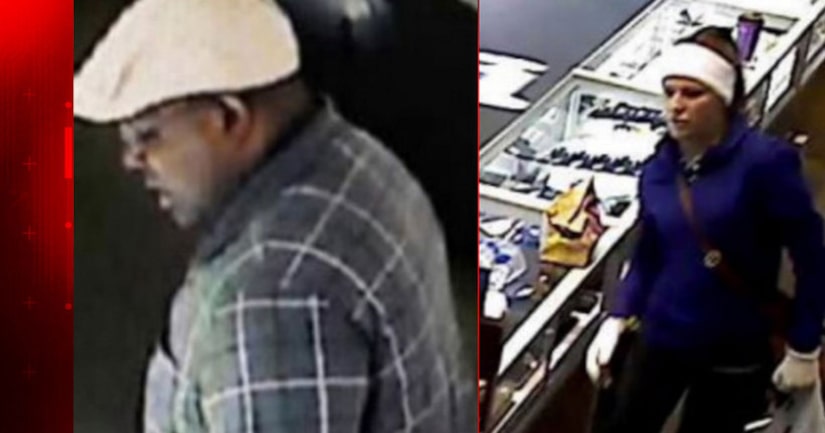 JACKSONVILLE, Fla. -- (WJXT) -- The FBI and state and local law enforcement are searching for two people they believe have been involved in multiple jewelry store robberies in Florida, Georgia, South Carolina, Tennessee and North Carolina.

According to the FBI, on Monday a white woman in her late 20s or early 30s walked into a Jared Vault location in Mebane, North Carolina, with a gun.

The woman forced two employees at gunpoint to a back room and zip-tied their hands before she returned to the merchandise area, removed items from display cases, put them into a shopping bag and left the store in an unknown direction, the FBI said.

The woman is believed to have pulled off several similar robberies, including:

The FBI said a black man in his late 30s or early 40s is also seen on surveillance video during the robberies in Panama City, Woodstock and Dawnsonville.

The woman is described as approximately 5 feet 8 inches and 130 pounds.

The man is described as approximately 6 feet tall and 250 pounds.

The duo appear to have used multiple vehicles in the robberies.

The FBI said the man and woman are considered armed and dangerous.

Anyone with information on the robberies or the identities of the people involved is asked to contact the FBI at 800-225-5324.