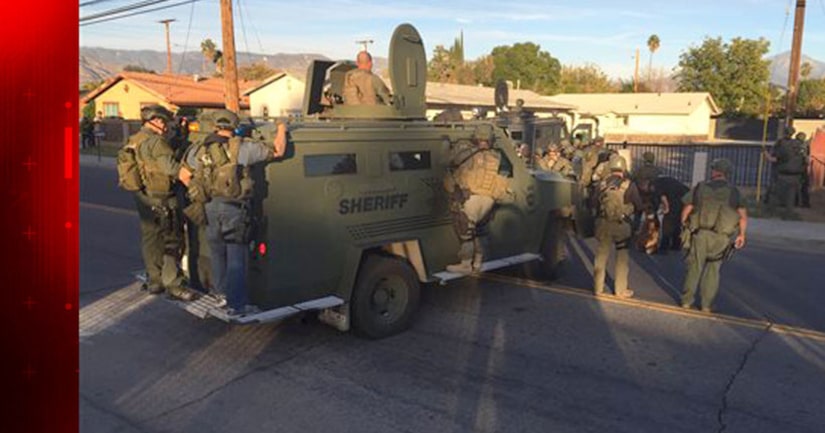 SAN BERNARDINO, Calif. -- (CWD) -- Two suspects were killed in a shootout with police after a pursuit resulting from an investigation into a mass shooting in San Bernardino on Wednesday.

SWAT teams and armored law-enforcement vehicles were converged on an area of several blocks in the city of San Bernardino on Wednesday evening.

Authorities responded to an active shooting scene in San Bernardino Wednesday at about 11 a.m. in which 20 victims were originally reported. Police later confirmed 14 people died and 17 people were injured.

The San Bernardino Fire Department first tweeted around 11:15 a.m. that they were responding to a report of a “20-victim shooting,” KTLA reported.

The call first came in at 10:59 a.m. of multiple shots fired from the area of 1365 S. Waterman Ave., KTLA reported. San Bernardino Police Department Lt. Richard Lawhead said the department's SWAT team was training nearby and was suited, “ready to roll” and responded rapidly.

The location of the shooting was confirmed as the Inland Regional Center, an agency offering programs and services to people with developmental disabilities.

The shooting happened in a conference area of the IRC where the San Bernardino County Department of Public Health was renting space to hold a banquet, the Associated Press reported.

Chief Burguan said as many as three suspects fled the scene in a dark-colored SUV.

In a 5:30 p.m. news conference Wednesday, Burguan said investigators were still working to clear the IRC building. He said a potentially explosive device was found and bomb-squad personnel were working to render the area safe.

San Bernardino authorities reported around 11:30 a.m. that there was an active shooter still in the area of Orange Show Road and Waterman Avenue near Park Center Circle. The area was immediately locked down.

San Bernardino County Sheriff John McMahon said in the morning news conference that a search of the building was ongoing. Courts, city and county buildings in the San Bernardino area, as well as area schools, were advised of the incident and to take precautionary measures.

A motive for the shooting was not immediately determined.

"We do not know if this is a terrorist incident,” said David Bowdich, assistant director in charge of the FBI's L.A. office, at the news conference. Public safety is the highest priority, Bowdich said.

A “hard closure” was in effect at Orange Show Road and Waterman Avenue and Park Center Circle in San Bernardino, the Sheriff's Department tweeted.

Agents from the Los Angeles Field Division of the Bureau of Alcohol, Tobacco, Firearms and Explosives were also responding, the agency said.

Officials said as many as three suspects entered a building in San Bernardino and began shooting. The suspects then reportedly fled the scene in a black SUV. The suspects were described as wearing military attire including body armor and carrying long rifles.

At about 3 p.m. a suspect or suspects were involved in a police pursuit. Broadcast reports showed a scene of a standoff with law enforcement officers training guns on a bullet-ridden black SUV on a surface street in the city directly south of the nearby airport.

There appeared to be a body lying in the street across from the SUV.

San Bernardino Police Chief Jarrod Burguan said tips led investigators to a residence in Redlands, where they observed a suspect vehicle leaving, and a pursuit was initiated that led back to San Bernardino near the original shooting scene at the IRC.

"There is an active scene unfolding in San Bernardino. Preliminary info is a suspect is down, officers are ok. Not confirmed if related," the San Bernardino County Sheriff's Department tweeted.

The police activity occurred on the 1700 block of San Bernardino Avenue. 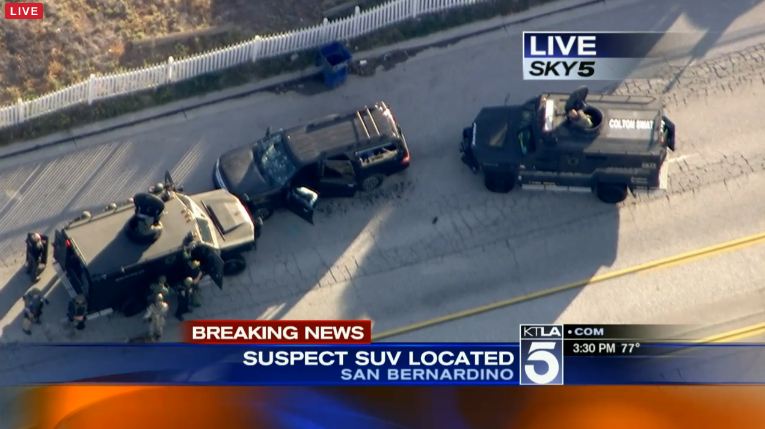 One officer was injured and hospitalized with a non-life-threatening wound, according to the police department. 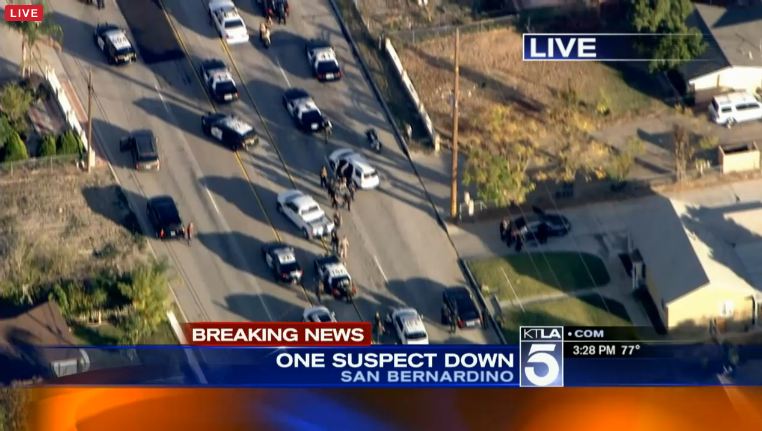 At a 5 p.m. news conference, a spokeswoman for the Loma Linda University Medical Center told reporters the hospital received five adult patients from the IRC shooting. The spokeswoman said that two patients were in critical condition, one was stable, one was in fair condition, and one patient was still being assessed. All five patients remained hospitalized Wednesday evening.

The spokeswoman said a code-yellow alert bomb threat was received by the hospital in the 2 p.m. hour. The threat was later deemed not credible and the alert was lifted after 3:30 p.m. The hospital remained on heightened alert Wednesday but was open for business as usual.

President Barack Obama has been briefed on the situation, according to the Associated Press.

San Bernardino is a city of about 214,000 people located approximately 60 miles east of Los Angeles.

"The public can call 1 866 346 7632 if they have any information or leads on the #ActiveShooter incident in #SanBernardino @SanBernardinoPD," the San Bernardino County Police Department tweeted at 2:11 p.m. PT.

Anyone with information regarding the active shooter incident in San Bernardino who would like to remain anonymous can call We-Tip at (800) 78-CRIME.