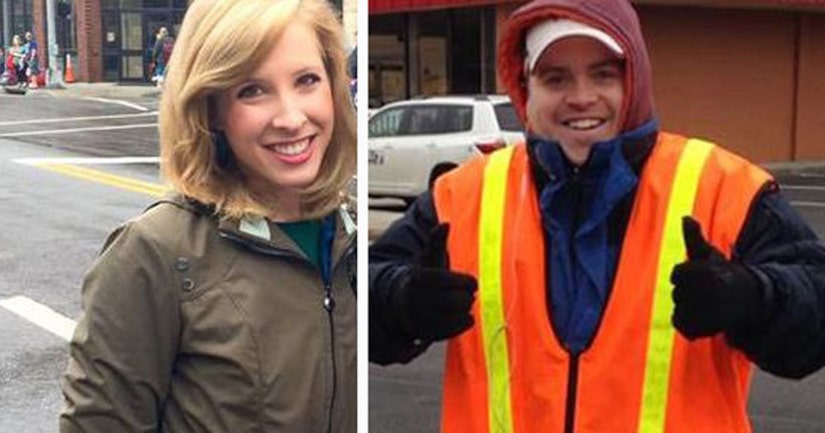 Courtesy of WDBJ-TV via AP

Vester Lee Flanagan, 41, allegedly shot three people on live TV Wednesday morning in Virginia, killing a reporter and a cameraman and wounding their interview subject, according to news reports.

Gunshots were heard during the live WDBJ broadcast early Wednesday morning before producers cut away back to the studio.

WDBJ-TV reporter Alison Parker, 24, and photographer Adam Ward, 27, were shot while working on a feature story at Bridgewater Plaza near Smith Mountain Lake around 6:45 a.m. Eastern Time, according to the station.

A third victim, Vicki Gardner, was in surgery Wednesday morning following the shooting, according to WDBJ. Her condition was later updated to stable.

Hours later, Flanagan turned the gun on himself during a confrontation with police. He was hospitalized in critical condition, and later died in the hospital at 1:26 p.m. local time, officials said in a Wednesday afternoon news conference.

A male suspect was recorded by a WDBJ camera, appearing to hold a weapon, the Augusta County Sheriff's Department stated in a news release.

WDBJ later confirmed Flanagan, who went by the name "Bryce Williams" on air, was a former reporter.

"We had to call the police to escort him from the building" in 2013, WDBJ Station Manager Jeff Marks said.

CRIME WATCH DAILY: WHO IS VESTER FLANAGAN? Claimed he was a 'paid companion'

Flanagan shot himself on I-66 in Faquier County at about 11:25 a.m. Wednesday, Virginia State Police told WDBJ.

Virginia State Police troopers tried to pull over Flanagan's vehicle after it was spotted moving eastbound on I-66 just before 11:30 a.m., but the driver did not stop, and eventually crashed, according to Virginia State Police spokesperson Corinne Geller. The vehicle had been identified by a police license-plate reader.

The driver had sustained a gunshot wound and was hospitalized for treatment of life-threatening injuries, Geller said. Geller did not name the suspect pulled from the vehicle, a silver Chevrolet Sonic. Police later confirmed it was Flanagan.

Flanagan's Ford Mustang was found at the Roanoke-Blacksburg Regional Airport on Wednesday, Franklin County Sheriff Bill Overton said in an afternoon news conference. The Chevrolet Sonic had been rented earlier in the month at the airport by Flanagan, Sheriff Overton said. 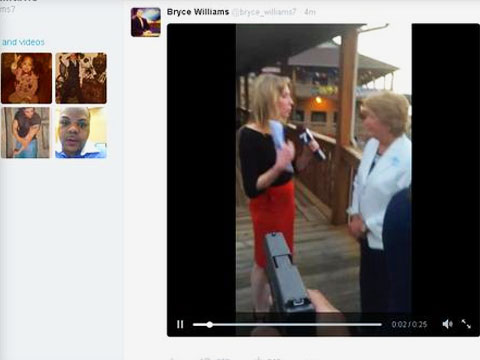 A Twitter account attributed to a man by the name of Bryce Williams, believed to be Flanagan, posted comments about the reporter and the cameraman, and purported to have video of the shooting, before the account was suspended Wednesday morning. 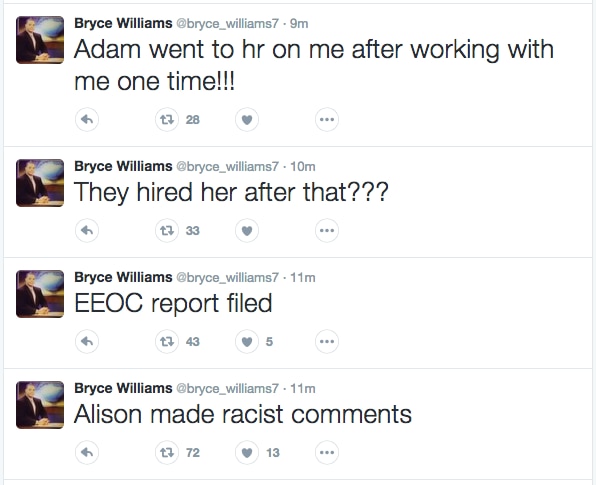 In the tweets, Flanagan also reportedly claimed he had filed an official complaint with the U.S. Equal Employment Opportunity Commission.

Sheriff Overton said in Wednesday's news conference that Flanagan had sent a "lengthy" multi-page manifesto to a news outlet, and that authorities had that statement.

ABC News tweeted that it had received a 23-page fax from someone identified as Bryce Williams; the manifesto was given to authorities, according to ABC News.

Anyone with information about the case is asked to call the Franklin County Sheriff's Office at (540) 483-3000.

"You could be in this business for 40 years and know that this kind of thing can happen and pray that it doesn't. And then when it hits ... the fact is overwhelming. Everybody in our building is just walking around in a daze. ... These people were not liked, they were loved.

Listen to the full interview

“Dorothy and I and our entire administration remain heartbroken over this morning's senseless tragedy. Our thoughts and prayers are with the victims' families, the WDBJ staff and the entire community that is mourning this awful loss. We stand ready to offer whatever resources or assistance we can in the wake of this horrific incident. We also continue to pray for the safe recovery of Vicki Gardner, who was wounded in this terrible incident.

“On behalf of all Virginians, I want to thank the public safety personnel from across Virginia who responded with great professionalism and bravery to this threat.

“As we reflect with heavy hearts on this tragedy, it is appropriate to begin to ask questions about how we can prevent these senseless events in the future. Keeping guns out of the hands of people who would use them to harm our family, friends and loved ones is not a political issue; it is a matter of ensuring that more people can come home safely at the end of the day. We cannot rest until we have done whatever it takes to rid our society of preventable gun violence that results in tragedies like the one we are enduring today.”