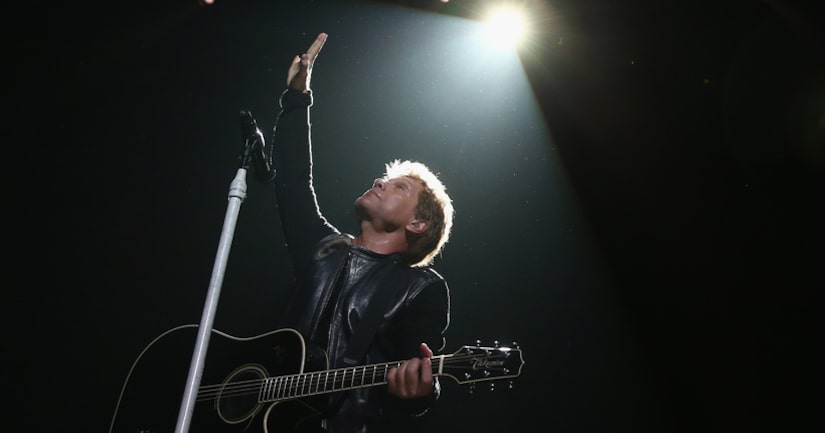 Jon Bon Jovi wrote the song from 1997 album "Destination Anywhere" about the August 7, 1996 murder of his personal manager's 6-year-old daughter, Katherine Korzilius. The girl's body was found by her mother and brother a mile from the family's Austin, Texas home. Investigators determined she suffered a fatal blow to the head at some point during her walk home from a community mailbox, where her mother allowed her to check the mail. Katherine's attacker has yet to be found.

The 80s punk rock band's "Jordan, Minnesota" is named for the Midwestern city where 24 adults and one juvenile were charged for their alleged involvement in what prosecutors claimed was an incestuous sex ring involving dozens of children between the ages of 2-17 between 1983-1984. All cases but one were eventually dismissed, with defendants accusing prosecutors of engaging in a witch-hunt. The remaining case ended in an acquittal.

The song, which appeared on the band's second studio album, "Nevermind," is about the 1987 kidnapping, rape and torture of a 14-year-old girl. Prosecutors said the victim was abducted after she accepted a ride while leaving a concert in Tacoma, Washington. According to investigators, the victim was taken to a mobile home, where she was raped, blindfolded, suspended from the ceiling and tortured with a leather whip, knife, razor, hot wax and a propane torch. The girl told police she escaped while stopped at a gas station with her attacker and later led authorities to the mobile home. Gerald Friend was arrested within days after authorities recognized him during a traffic stop. He was sentenced to 75 years in that case. Prosecutors said Friend was convicted in a similar attack 27 years prior but only served 20 years of a minimum 75-year sentence. He was also ordered to complete his previous sentence.

The 1982 song that opens Springsteen's acoustic album by the same name was inspired by Charles Starkweather, a teenager convicted in a robbery and murder spree across the state in 1958, during which he was accompanied by girlfriend Caril Fugate. Starkweather was convicted and executed the following year. Fugate, who was arrested at age 14, maintained her innocence but was sentenced to life in prison. The U.S. Supreme Court later ruled life sentences for juveniles were unconstitutional and she was eventually paroled in 1976.

The band's 1985 debut album "This Is Big Audio Dynamite" was inspired by the 1984 murder of Gary Lauwers, whose body was discovered with multiple stab wounds and his eyes gouged out by alleged followers of a satanic cult, reports the the New York Times. Seventeen-year-old Ricky Kasso, of Long Island, was charged in the murder but was later found hanged in his jail cell. James Troiano, an 18-year-old Long Island man, was also charged. Troiano was acquitted of second-degree murder in the case in 1985.

The post-hardcore band was inspired by headline-making stories of multiple women who mysteriously disappeared and were later found dead in the factory city of Juarez, Mexico, nicknamed the “capital of murdered women" due to the string of fatalities beginning in the early 90s.

From the folk rock singer-songwriter's 2005 album "Illinoise," Stevens recounts the story of the Chicago man better-known as the “Killer Clown” serial killer. Gacy, Jr. was convicted in 1980 of murdering 33 men and boys, more than anyone else in U.S. history at the time, according to the Ottawa Citizen. Gacy, Jr. was sentenced to death and in 1994 died by lethal injection.

The Irish band's 1979 track was inspired by a fatal school shooting that same year at Grover Cleveland Elementary in San Carlos, California. Police said 16-year-old Brenda Ann Spencer wounded eight children and a police officer and killed two adults when she opened fire. When asked by a reporter from the San Diego Tribune why she did it, Spencer said: “I don't like Mondays. This livens up the day.” Spencer pled guilty to two first-degree murder charges and assault with a deadly weapon, reports the New York Daily News. She was sentenced to 25 years to life and will be next be eligible for parole in 2019.

The 1993 track from the band's "Monster" album was inspired by a 1986 attack targeting news anchor Dan Rather, during which Rather said one of two assailants repeatedly asked, “What's the frequency, Kenneth?” before they fled the scene, according to Mental Floss. In 1994, Rather identified William Tager as one of his attackers, after Tager was convicted in the fatal shooting of an NBC stagehand outside the "Today" show studio in New York City. Tager was sentenced to 25 years in prison in that case and released in 2010 for good behavior.

The song, from the band's eponymous debut album, tells the story of the Moors Murders victims – five children tortured and killed by Ian Brady and his then-girlfriend Myra Hindley in Manchester, England in the mid-60s. In the haunting lyrics, Morrissey names the children killed, singing from the victims' point of view.