AURORA, Colo. (TCD) -- A 35-year-old man was arrested on suspicion of murder after he allegedly shot and killed his former boss due to a paycheck typo.

According to Aurora Police, on Oct. 20 at 7 p.m., officers received a call about a trespass reporting on the 16800 block of Centertech Parkway, but when they arrived, the call was upgraded to a shooting.

Police said there was a "dispute between an employer and a former employee," which left the employer dead. More police officers arrived at the scene and searched the property for the suspect, who had reportedly already fled. A SWAT team and a Denver Police helicopter reportedly located the suspect’s vehicle and "performed a high-risk traffic stop."

The suspect, Lloyd Love, was arrested without incident.

KDVR-TV identified the victim as 52-year-old Marvin Johnson. According to an affidavit cited by KDVR, Love received a paycheck from American Eagle Protection but was unable to cash it because it was made out to Lloyd K. Love. His middle initial is reportedly C.

He called Patricia Johnson, who co-owns the security company, and told her he needed a new check. He reportedly went to the aerospace company Raytheon on Centertech Parkway because Patricia was working security there. She allegedly said she needed his old paycheck in order to issue him a new one, but he said he already ripped it up.

Marvin Johnson, Patricia’s husband and co-owner of American Eagle Protection, reportedly drove to the area and tried to fix the situation. He reportedly told Patricia to write Love a new check anyway.

Then, Love allegedly shot him in the face and ran away.

Love reportedly called his girlfriend and asked her to pick him up. When he got in the car, he allegedly said he "just did something stupid."

According to KDVR, Love’s girlfriend said Love had previously been diagnosed as bipolar and schizophrenic, and on the day of the shooting, he had allegedly been "hearing voices, believing that people were in his head, knowing what he is doing, and controlling him."

Love had reportedly only worked for the security company for about four days and was not allowed to have a gun because he is a convicted felon.

Arapahoe County Jail records show he was booked on a charge of first-degree murder and is being held without bond.

2 arrested, including employee, after alleged 'assault with a sandwich' at restaurant 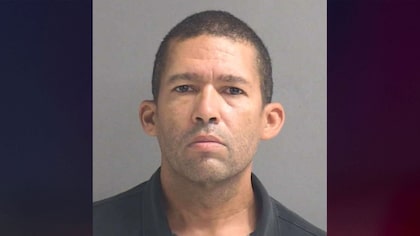