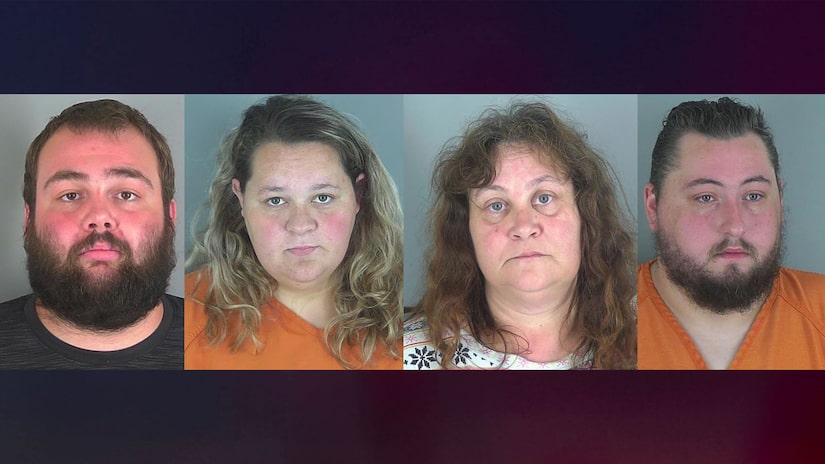 SPARTANBURG COUNTY, S.C. (TCD) -- A father and three other relatives stand accused of torturing a child and trying to cover up the injuries.

According to a news release from the Spartanburg County Sheriff’s Office, on Sept. 2, deputies responded to a home on Waspnest Road in Wellford, South Carolina, to a report of child abuse. At the scene, authorities reportedly learned a child victim had been hidden from a Department of Social Services representative after she visited the home several times to investigate.

The Sheriff’s Office said the home housed four adults and four children of different ages, and the oldest child "had a noticeable limp and temporary tattoos covering multiple visible bruises on both legs."

The four adults were reportedly interviewed separately, and authorities learned the family recently moved to South Carolina from Vermont.

In an interview, the Sheriff’s Office said the stepmother admitted to covering up the victim’s legs with makeup when the Department of Social Services started visiting their home.

Initially, authorities were able to gather enough evidence to arrest the father and stepmother for unlawful neglect of a child, the Sheriff’s Office said.

The four children in the home were reportedly taken into emergency protective custody. The victim was transported to a hospital to treat extensive bruising and blood loss, according to the Sheriff’s Office.

After a medical exam, a forensic doctor reportedly determined the child "clearly met the criteria for a medical diagnosis of child torture." The victim was interviewed and reportedly said all four of the family members inflicted the abuse.

During a search of the home on Waspnest Road, the Sheriff’s Office said authorities found more evidence that further confirmed the victim’s disclosure.

The suspects were scheduled to appear in court on Friday, Oct. 7.