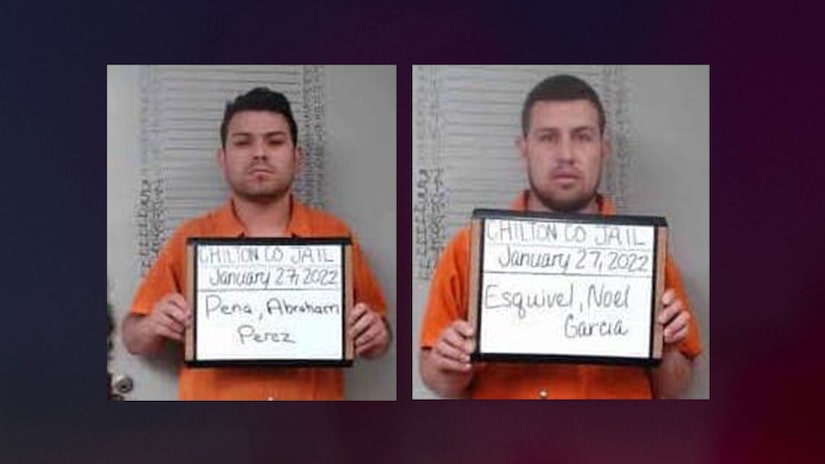 CHILTON COUNTY, Ala. (TCD) -- Two men in their late 20s were arrested for their alleged involvement in the deaths of three men whose burned bodies were found in July.

In a Jan. 28 statement, the Chilton County Sheriff’s Office said investigators arrested Noel Garcia Esquivel, 28, and Abraham Pena Perez, 27, and charged them with three counts of murder each. The Sheriff’s Office said the men are believed to be "involved in drug trafficking" and are in the United States illegally.

According to the press release, Chilton County Sheriff’s Office deputies went to a wooded area off County Road 5014 on July 2 after receiving a report about a "burned vehicle containing human remains." Deputies discovered remains of three individuals inside a "badly burned SUV" and sent the evidence to the Alabama Department of Forensic Sciences for further examination. The Sheriff’s Office Facebook, however, said they got the call about the car on July 29.

The victims were later identified as 24-year-old Gabriel Alonzo Rios Jr., 37-year-old Gilberto Munoz Cabrera, and 36-year-old Javier Quintero Gonzalez. The Sheriff’s Office says at least two of the victims had gunshot wounds prior to the vehicle and their bodies being set on fire.

In August, the Sheriff’s Office shared photos of the victims and said the men were traveling to Alabama from Tennessee for a job. They were all from the Nashville and Hendersonville, Tennessee, area, according to the statement.

The Chilton County Sheriff’s Office says a judge set bond at $1.5 million for each murder count, so they are each being held on $4.5 million bond.