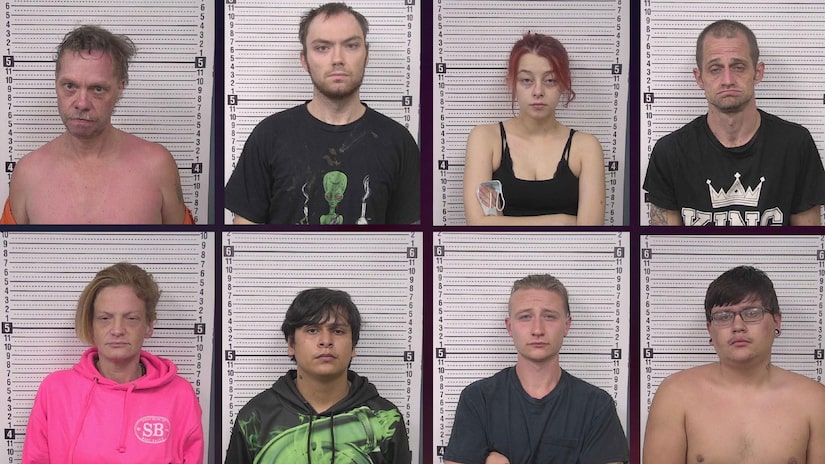 CALDWELL COUNTY, N.C. (TCD) -- Eight people were arrested after a man and his girlfriend were allegedly blindfolded, kidnapped, and shot while at an acquaintance’s house.

According to the Caldwell County Sheriff’s Office, 24-year-old Austin Clay Colley was taken to Caldwell UNC Health Center Wednesday at approximately 9 a.m. with two gunshot wounds to his torso. His girlfriend, 35-year-old Angela Nicole Kidd, was with him at the hospital. Hospital staff reportedly called Caldwell County Deputies to report the shooting victim.

The Sheriff’s Office says Colley and Kidd were at the acquaintance’s residence on Joplin Road in Hudson when they were attacked. The group allegedly "assaulted him and his girlfriend and proceed to bound them and place a blindfold on them."

At the second location, which deputies determined was an abandoned property on Good’s Creek Road, someone shot at the couple and struck Colley. Kidd was reportedly not injured by the gunfire. The Caldwell County Sheriff’s Office reports Colley was flown to Baptist Hospital in Winston-Salem for more treatment, and he is in stable condition.

Kidd reportedly told deputies after the suspects left the area where Colley was shot, she went to road nearby and got the attention of a motorist who took them to Caldwell Hospital.

The charges range from assault with a deadly weapon to kidnapping. The youngest suspect is 20 and the oldest 50.

Sheriff Alan Jones said in the statement, "We intend to charge everyone involved in cases that are related to guns, drugs, violence, and kidnapping. We take a firm stance against this type of behavior."

According to the Caldwell County Sheriff’s Office, the eight people arrested and their charges are:

Thirty-six-year-old Tabitha Renee Bumgarner, 23-year-old Adam Solis Hernandez, and 18-year-old Devan Alan Souther were all charged with first-degree kidnapping and their bonds were set at $100,000 secured.

Tristan Douglas Coffey, 22, was charged with first-degree kidnapping and failure to appear/indecent exposure. His bond was set at $120,000 secured.