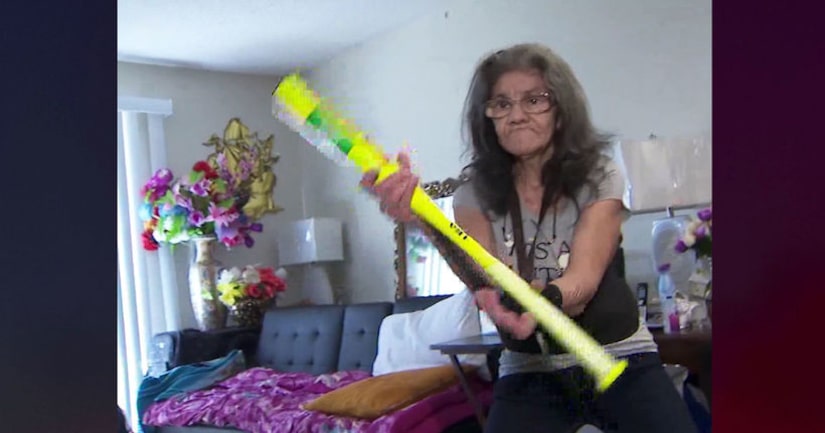 A man broke into the unit and then threw the victim, Elizabeth McCray, to the ground, she told KTLA on Wednesday. He then jumped on her and began beating her, she said.

The intruder reportedly went to Lorenza “Miss Kitty” Marruja's apartment first, but ran when she pulled out a baseball bat.

“I was aiming at his head, and he backed off and said, 'No Miss Kitty, no Miss Kitty, I'm not gonna hurt you,'” Marruja recalled. “And I said, 'Get the 'F' out of my apartment right now.”

Moments later, she heard McCray screaming for help. The intruder had turned out the lights in McCray's home and stuck her on the neck, leaving her on the floor pleading for help, she said.

That's when McCray says Marruja came charging in. She didn't bring her bat, but she was able to subdue the suspect.

“I had him on the ground. First, I went down like to this to his chest,” Marruja said, demonstrating her actions. “And then this was on his throat, like that. I had my hand right here on his jaw and I was aiming toward his eyes. And he said, 'No Miss Kitty, no Miss Kitty.' And he got scared.”

Fontana Police Officer Jennie Venzor said that while police don't recommend home-invasion victims engage directly with attackers, they were impressed. The man was arrested on suspicion of elder abuse.