The New York Times report the shooting suspect was identified as Roy Den Hollander, a self-described “anti-feminist” lawyer who flooded the courts with seemingly frivolous lawsuits that sought to eliminate women's studies programs and prohibit nightclubs from holding “ladies' nights.”

The Times reports investigators are exploring whether Den Hollander had decided to kill some of his enemies after he was diagnosed with cancer diagnosis.

The New Jersey Globe reports the murder suspect has taken his own life, two sources told the Globe. The man, still unidentified, was a disgruntled attorney who had appeared before before U.S. District Court Judge Esther Salas. Law enforcement investigating the shooting has not commented on the identification of the suspect.

New York State Police told NJ Advance Media they are investigating a death in the town of Rockland in Sullivan County, N.Y.

WABC-TV reports a body found at Campsite and Berry Brook roads in Rockland, New York, is believed to be the suspect. Investigators believe Judge Salas's husband Mark Anderl was the intended target.

NORTH BRUNSWICK, N.J. (NJ.com) -- The 20-year-old son of a New Jersey federal judge was killed and her husband was wounded Sunday afternoon at the couple's home by a shooting suspect who remains at large.

The suspect is believed to have been dressed as a FedEx delivery driver as he arrived at the home of U.S. District Judge Esther Salas on Point of Woods Drive in North Brunswick around 5 p.m., law enforcement sources and officials told NJ Advance Media. No further description of the suspect has been released.

Salas was in the basement at the time of the shooting and was not injured, sources said.

NJ Advance Media reports Salas, 51, has handled cases involving members of the Grape Street Crips, in connection with a long-running drug-trafficking network that was taken down by the FBI in 2015. She was also the judge who sent "Real Housewives" stars Joe and Teresa Giudice to prison. More recently, Salas has presided over an ongoing lawsuit brought by Deutsche Bank investors who claim the company made false and misleading statements about its anti-money laundering policies and failed to monitor “high-risk” customers including convicted sex offender Jeffrey Epstein. 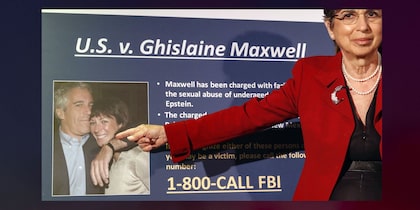