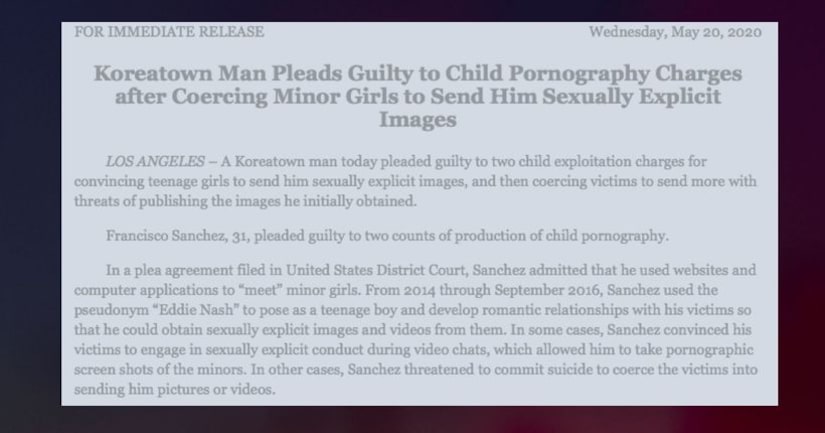 LOS ANGELES (KTLA) -- A Koreatown man pleaded guilty Wednesday to two federal charges of producing child pornography for posing as a teenage boy and persuading underage girls to send him sexually explicit images of themselves online, then threatening to publish the images if they did not send more, prosecutors said.

Francis Sanchez, 31, admitted during a hearing in federal court in Los Angeles to targeting minor girls via websites and applications between 2014 and 2016, according to the U.S. Department of Justice.

“Sanchez used the pseudonym 'Eddie Nash' to pose as a teenage boy and develop romantic relationships with his victims so that he could obtain sexually explicit images and videos from them,” U.S. DOJ spokesman Thom Mrozek said in a written statement. “In some cases, Sanchez convinced his victims to engage in sexually explicit conduct during video chats, which allowed him to take pornographic screen shots of the minors. In other cases, Sanchez threatened to commit suicide to coerce the victims into sending him pictures or videos.”

Once he obtained the illegal images, Sanchez would threaten to publish them if they refused to send more, officials said.

In his plea agreement, Sanchez admitted that he “intentionally targeted girls that he knew to be suicidal or despondent, because [he] believed they would be easier to manipulate and control,” according to Mrozek.

While only charged with two counts of producing child pornography, related to two victims ages 13 and 14, Sanchez admitted in his plea agreement to victimizing another five girls, officials said.

“Sanchez further admitted that he cyberstalked two victims — which included threatening to make one girl 'internet famous' by publishing child pornography depicting her — and that he distributed child pornography on a peer-to-peer file sharing network,” Mrozek said.