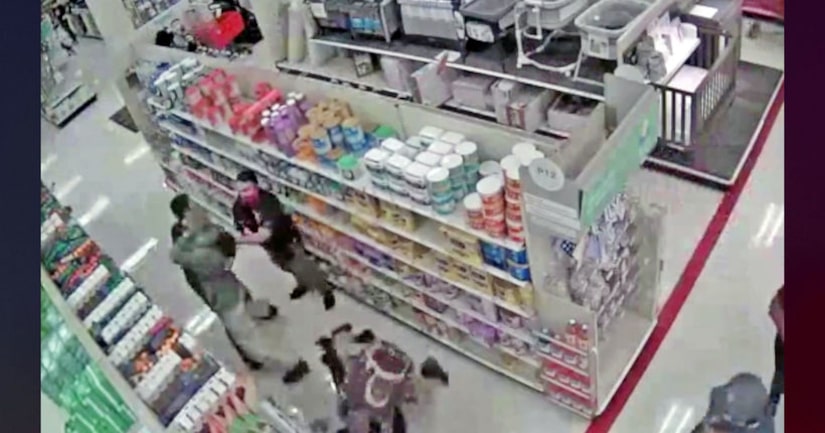 VAN NUYS, LOS ANGELES (KTLA) -- A security guard at a Target store in Van Nuys suffered a broken arm in an attack by two men who were being escorted out of the business for not having masks, officials said Monday.

The Los Angeles Police Department released surveillance video that captured the May 1 incident inside the store. The footage shows three security personnel walking behind two men, one of whom turns around and hits a security officer in the face. A second guard pushes the attacker against a shelf, and a scuffle ensues.

The other man being escorted out and the two other guards become involved in the fight but stop shortly as shoppers and store associates surround them, video shows. The security guard who pushed the initial attacker against the shelf lay on the floor, apparently hurt.

L.A. Fire Department paramedics transported one of the security personnel to the hospital for a broken arm, according to LAPD.

The two men, identified by police as 31-year-old Phillip Hamilton and 29-year-old Paul Hamilton, were arrested the same day with their bail set at $50,000 each. Lt. Jim Gavin told KTLA the two were arrested for battery over the weekend.

MORE: Van Nuys Target security guard suffers broken arm in attack by 2 men escorted out for not having masks - KTLA