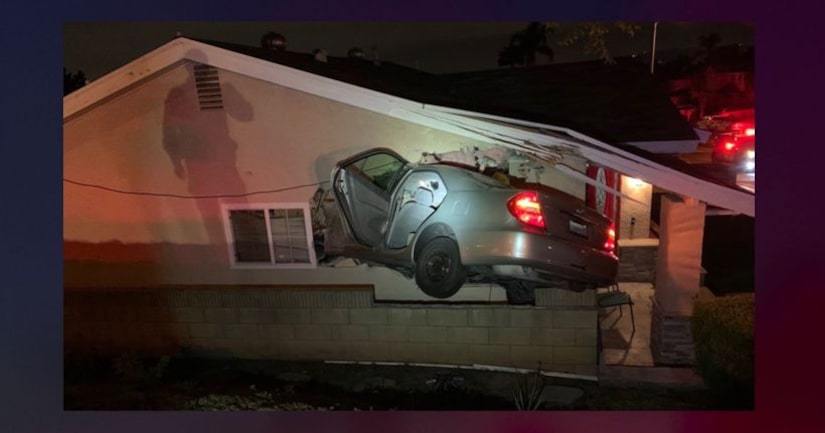 LOS ANGELES (KTLA) -- Investigators are seeking a driver and passenger who ran from a crash, leaving a car embedded in the side of a Rowland Heights house on Saturday morning.

The crash took place about 4:40 a.m. in the 2000 block of Blakeman Avenue, according to Sgt. J. Kawanaka of the California Highway Patrol's Sante Fe Springs-area office.

“The male driver of a (2003) Toyota Camry traveling north on Blakeman Avenue, south of Pen Street, drove off the roadway, become airborne and collided into a residence,” the sergeant said in a written statement. “Family members were inside the residence at the time of the collision but no one was injured.”

The driver and a passenger, both described only as men, were seen running from the crash scene after the impact, he said.

The violent crash was caught on video by Tina Lebron's doorbell camera.

“My mother in law and I were asleep. My husband left for work 14 minutes before,” she said via social media.

It appeared some teenagers were spinning “donuts” in the street when the driver lost control.

“Let me tell you, it was the scariest thing. The noise!!!!” she wrote. “My family and dogs are shaken up but ok.”