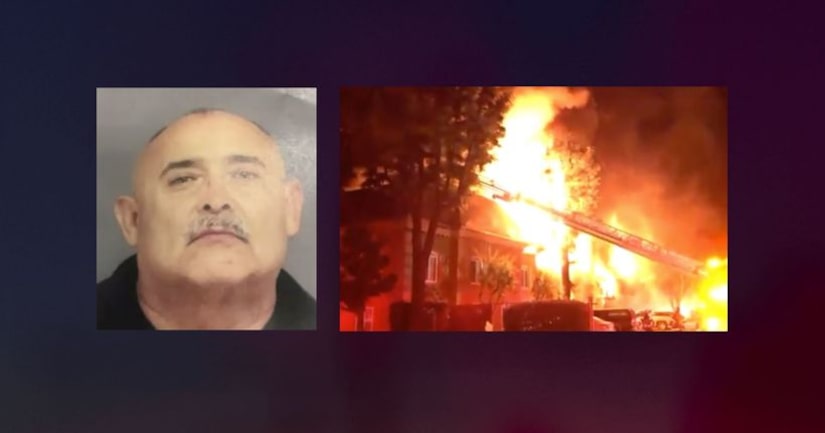 TUSTIN, Calif. (KTLA) -- An arson suspect was arrested Wednesday night after an early morning fire that killed a dog and displaced dozens of people at an apartment complex in Tustin, authorities said.

The massive blaze burned for hours after breaking out shortly before 3:30 a.m. in the 15700 block of Williams Street, according to Orange County Fire Authority. The agency did not declare a knockdown until just after 8 a.m.

Investigators believe the fire started in a unit on the first floor, quickly spread to the second floor and engulfed the building.

“It's a center courtyard building, so if you can imagine a square with apartments around it, that fire progressed all the way around the building," Capt. Tony Bommarito said. "That's why you see so much damage.”

Later Wednesday, 59-year-old Patrick Andrew Ceniceros went into a Tustin police station asking to speak with officials. When investigators interviewed him, he made some incriminating statements, according to police Lt. Andy Birozy.

Ceniceros — a resident of the complex — would be booked on suspicion of arson, the lieutenant said. Birozy previously said the suspect did not live in the building.

Investigators have not yet determined what ignited the flames. Most residents said they were sleeping and woke up disoriented to authorities knocking at their doors.

“We were sleeping, dead asleep,” Eymy Murillo said. “They broke into the house and just told us to get out as soon as possible. We had no clue — it was a scary experience, honestly.”