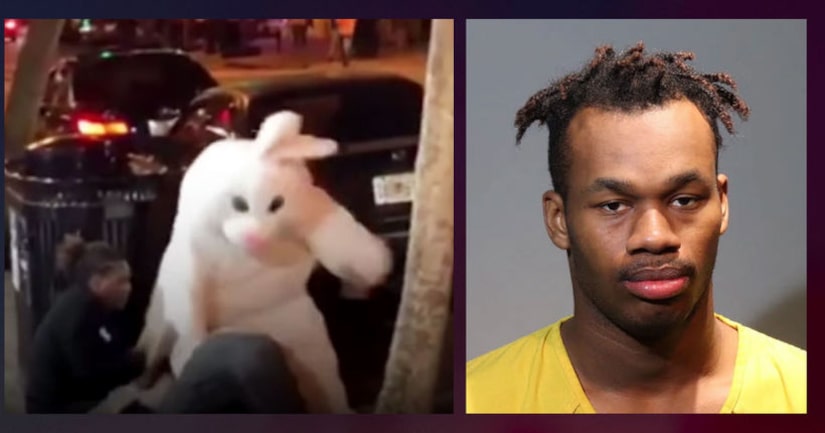 A Florida man famous in the Orlando area last year for fighting a man who was attacking a woman on the street - while wearing an Easter Bunny costume - was arrested last week for allegedly fleeing the scene of a wreck.

Antoine McDonald made headlines last year when a viral video showed him wearing an Easter Bunny costume while fighting a man who was attacking a woman outside a bar in Orlando.

McDonald, 21, was arrested on Jan. 16 of this year on suspicion of hit and run.

Authorities believe he was riding a motorcycle when he hit a carport, damaging a car, on Jan. 16.

The Orlando Sentinel reports Florida Highway Patrol deputies responded to a crash in Altamonte Springs, where a motorcyclist reportedly ran a stop sign, drove into a yard and then hit the carport. The carport reportedly collapsed on top of a vehicle, damaging it.

A witness told deputies he saw McDonald limping away, the Sentinel reports.

Deputies went to McDonald's residence, saw a vehicle departing the property, pulled it over, and found McDonald lying down in the back seat, in the Easter Bunny costume.

He denied being in the accident, telling deputies: “I wasn't in any crash. I'm the Orlando Easter Bunny. Google it.”

After removing his costume, McDonald was hospitalized for leg and rib injuries, then booked at the Seminole County Jail on charges of leaving the scene of a crash involving property damage; driving with a suspended license; and operating a motorcycle without a license.

McDonald became an overnight sensation last year when the video of him fighting another man on Easter Sunday went viral.

McDonald already has a criminal record for burglary in New Jersey and armed robbery in Delaware. He's also named a person of interest in crimes in Florida, according to the Pasco County Sheriff's Office.