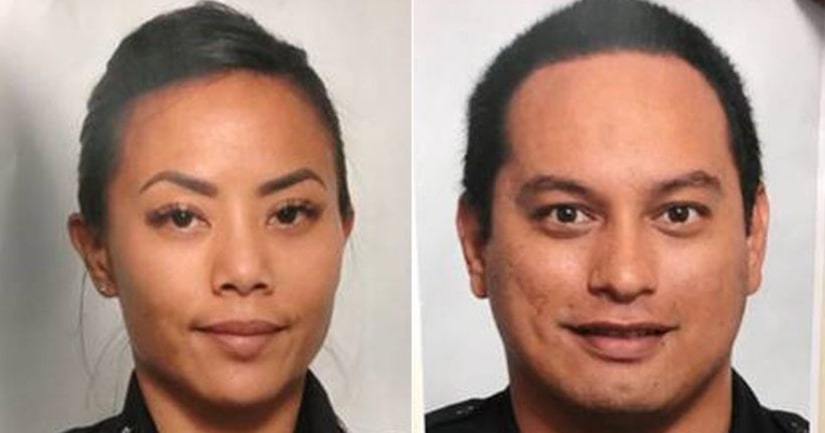 HONOLULU, Hi. (KTLA) -- A man shot and killed two police officers Sunday as they responded to a home in a leafy neighborhood beneath the rim of a famed volcanic crater near Waikiki Beach, authorities said.

The officers were responding to a call from a woman who said she needed help and found her with a stab wound to her leg, police said Sunday. The suspect opened fire as police arrived, killing Officers Tiffany Enriquez and Kaulike Kalama, said Honolulu Police Chief Susan Ballard. The house caught fire, and Ballard said the suspect as well as two women who were in the home were unaccounted for.

Ballard said authorities would continue to search for the shooter, but that it was likely that he was inside the home when it burned.

The homeowner, Lois Cain, had recently sought to have a man evicted, court records showed. A neighbor told The Associated Press she saw Cain being loaded into an ambulance with knife wounds.

Cain's condition was not immediately confirmed, nor was the suspect's. Flames emerging from the home soon spread to several others. Honolulu fire said five homes were “complete losses.”

“I would like to express my deepest condolences to the family and friends of the two officers as well as the entire Honolulu Police Department,” Honolulu Mayor Kirk Caldwell tweeted. “This is an unprecedented tragedy for not only the City and County of Honolulu but the entire state of Hawai'i.”

MORE: 2 police officers shot and killed in Honolulu; no suspect in custody - KTLA