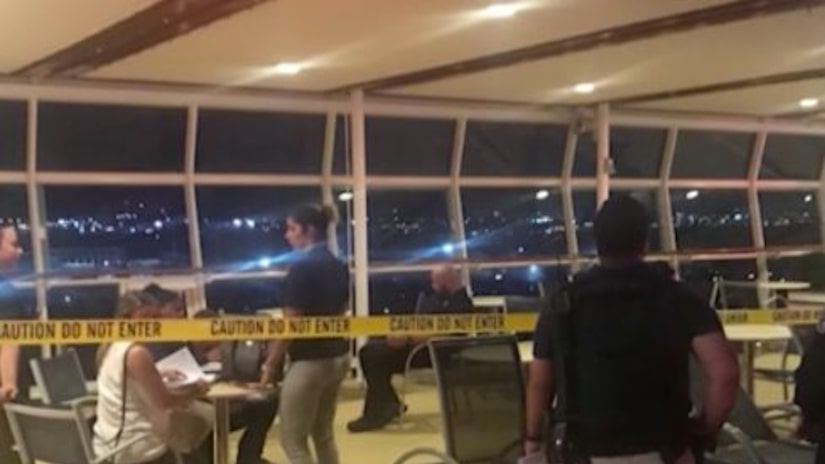 SAN JUAN, P.R. -- (KTLA) -- Video appears to show the moment Chloe Wiegand fell from her grandfather's arms to her death aboard a Royal Caribbean cruise ship in July.

Chloe, 18 months old, was playing on a Royal Caribbean ship docked in Puerto Rico with her grandfather, Salvatore “Sam” Anello, when she fell from an open glass window to her death.

The video appears to show Anello lean through an opening before picking up the toddler and holding her up to the opening.

It is unclear from the video how deep the opening is.

Shortly after Chloe is gone from his arms.

CNN has reached out to Anello's attorney and to Royal Caribbean for comment on what is seen in the video.

According to the lawsuit the family filed earlier this month against the cruise line, Anello lifted Chloe up onto the railing and held her as she leaned forward to bang on the glass. There was no glass pane and she slipped from Anello's arms, falling 150 feet below to the pier, resulting in her death, the suit says.

Anello was not aware that some of the glass panes could be opened, the suit said. The suit claims that there was no indication that the wall of glass panes was not a fixed wall and that the wooden rail was located approximately 18 inches from the glass pane.

“Our hearts go out to the family for their tragic loss. Mr. Salvatore Anello is currently being criminally prosecuted for negligent homicide in the case,” Fishman said.

Michael Winkleman, the family's attorney, said the family “publicly asks the Puerto Rican authorities, why was this footage released? Why do you continue to inflict such heinous emotional distress on our family? Haven't we been punished enough by the loss of Chloe? Finally, The family requests an immediate, independent investigation done into the circumstances surrounding the leak.”