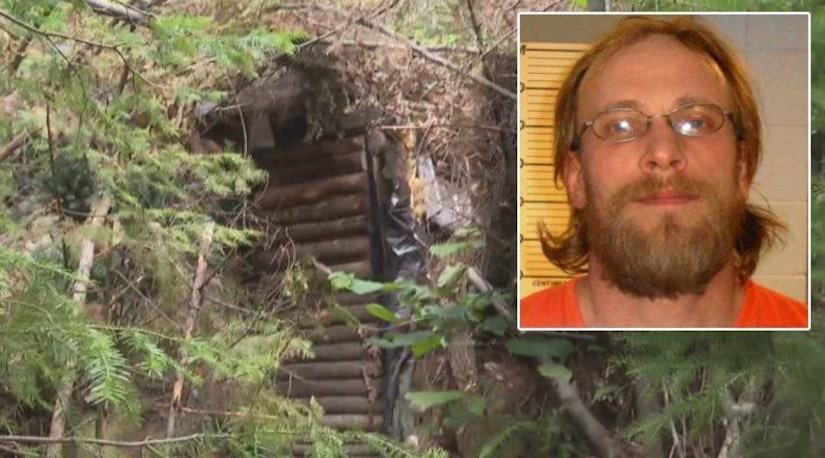 RINGLE, Wis. (WXIN) -- A Wisconsin fugitive is back in custody after a hunter stumbled across a bunker hidden in a wooded area in the township of Ringle, according to WSAW-TV.

Jeremiah Button disappeared in 2016 just two weeks before trial on charges of child sex assault and child pornography. He was arrested last Friday.

Thomas Nelson, of Wausau, first noticed the log-lined front door of the makeshift home several months ago, half-hidden behind brush and apparently carved into a hillside. Authorities say Button lopped the tops off some trees and even planted others to hide the bunker.

Nelson said "brush marks" led him to the location the first time, but when he saw the door he "couldn't get out of there fast enough." Unable to shake his curiosity, however, he described going back on Friday to investigate:

"I pushed the door open, and I look inside and I can see canned foods, there's little storage boxes, and I'm like... I gotta go in. I come around the corner a bit and there he is, laying in his bed."

Nelson said he was shaking at that point and backed out to call law enforcement from a distance. Deputies responded and took Button into custody after a 20 minute standoff. Deputy Matt Kecker told WSAW that Button appeared almost to welcome the interaction with others.

Once inside the bunker where Button survived for three brutally cold winters, deputies found walls lined floor-to-ceiling with items believed to have been taken from a nearby landfill. Button had reportedly rigged car batteries to solar panels to power LED lights, radios and other devices. He also had a bike-powered generator for cloudy days.

"He was not only surviving, but thriving in this structure through all of the different supplies he was able to find," Detective Lieutenant Jeff Stefonek said. "Not a lot of air comes in from the outside, and it was a small enough space that he was able to survive the winters obviously, and keep himself warm, and it's cool down there this time of year, and it is stocked full of all of the items that he was able to pilfer from the Marathon County landfill by sorting through garbage."

MORE: Wisconsin man accused of child sex crimes hid in bunker for 3 years 'not only surviving, but thriving' - WXIN