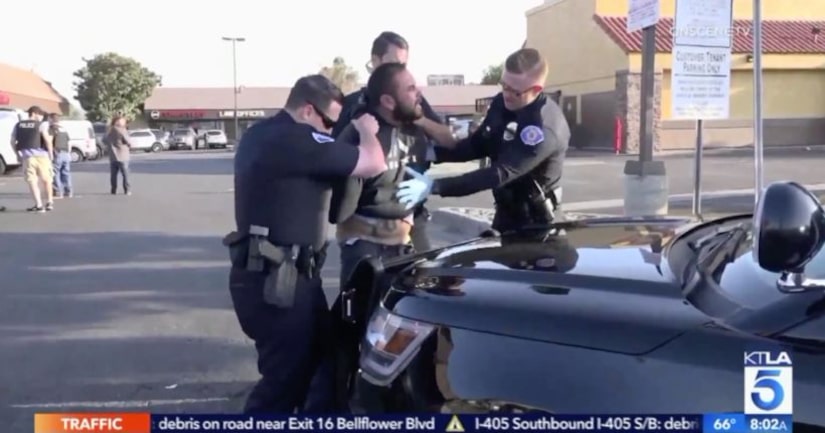 ORANGE COUNTY, Calif. (KTLA) -- A man apparently "full of anger" stabbed four people to death and wounded two others in a fatal stabbing and robbery rampage that started in Garden Grove and stretched into Santa Ana before he was arrested Wednesday night, the Garden Grove Police Department said.

Police on Thursday had yet to publicly identify the 33-year-old suspect while they worked to contact the families of the victims and piece together a motive for the attacks.

"It's just pure hate that this guy did this," Garden Grove police Lt. Carl Whitney said on the night of the killings. "We know that this guy was full of anger and he harmed a lot of people tonight."

The victims, who appeared to have been targeted at random, were a 62-year-old man and another unidentified man who were killed in Garden Grove as well as two other men, one of them a security guard, in Santa Ana, according to Garden Grove police news release.

Those wounded were a 54-year-old woman and a 44-year-old man.

The rampage started at about 4 p.m. with three robberies in Garden Grove.

The first was reported at a Garden Grove apartment complex, followed by a robbery about 20 minutes later at a bakery, according to police. The victim told police that the suspect was armed with a gun and that he had fled the scene in a silver Mercedes.

At about 5 p.m., an hour after the reports of the crime rampage started, the first stabbings were reported at the same apartment complex where a victim called about a burglary on Jentges Avenue. Responding officers found two men that had been stabbed numerous times. One was pronounced dead at the scene and the other later died at a hospital.

A robbery was then reported at the Cash & More business followed by another robbery at 6:06 p.m. at Best One Insurance, where a 54-year-old female employee was down on the ground and "profusely" bleeding. She had been stabbed multiple times. Authorities said Thursday she was in serious but stable condition.