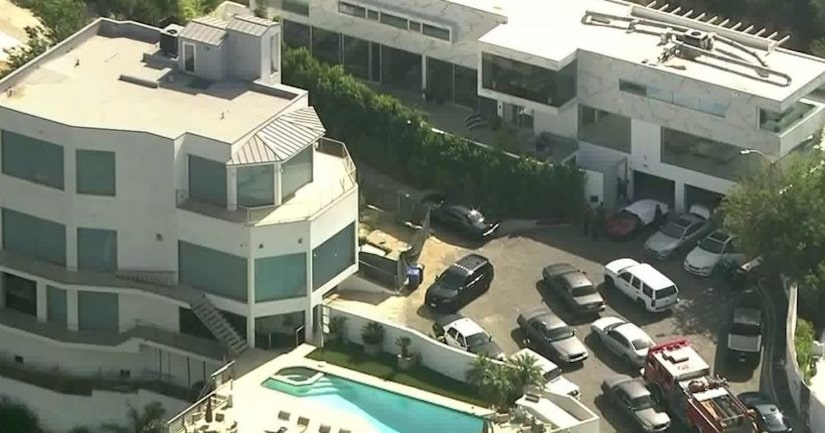 LOS ANGELES (KTLA) -- Several people have been detained after deputies raided a home leased to rapper YG in connection with a deadly shootout and pursuit earlier this month, authorities said Thursday.

The Los Angeles County Sheriff's Department confirmed deputies responded to the home after an SUV registered to the rapper was involved in a chase on July 3.

People inside the vehicle had fired shots at deputies pursuing the vehicle, authorities said, and a pedestrian was killed in the crossfire.

Some of the officers sustained minor wounds while one deputy was actually struck by gunfire and suffered a graze wound, according to sheriff's officials.

One person was taken into custody while another possible suspect was still being sought, authorities said at the time.

YG, whose birth name is Keenon Daequan Ray Jackson, denied being involved in the incident in a July 5 tweet. Officials said he was not present during the raid Thursday morning.

Sky5 flew over the scene at the sprawling mansion located in the 1600 block of Blue Jay Way, where several investigators were seen shortly after 10 a.m. Some were seen walking through a home garage where three luxury cars were parked while two fire engines and several patrol vehicles were seen in the driveway.

Two weeks earlier, deputies had been trying to pull over a suspected reckless DUI driver in a black Cadillac Escalade registered to the rapper when the SUV fled and ended up in a pursuit. Beginning about 11:20 p.m. on July 3, deputies followed the vehicle into a residential area in Compton, where authorities said shots were fired from the Escalade.

The chase circled the neighborhood as officers returned fire before it continued onto the 405 Freeway and into Inglewood.

Authorities later said a dead body was discovered near the shooting scene in Compton. The victim, a man in his 60s, appeared to have multiple gunshot wounds.