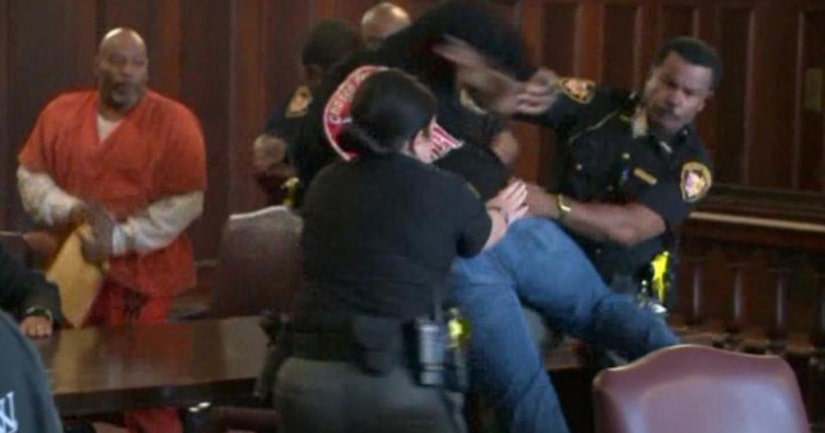 MAHONING COUNTY, Ohio (KSTU) -- A brawl broke out in a Mahoning County, Ohio, court as two brothers attacked the man convicted of killing their mother.

Dale Williams was scheduled to be sentenced Thursday after confessing to running his ex-girlfriend, Elizabeth Pledger, off the road and shooting her in 2017, Mahoning County Sheriff Jerry Greene said.

Greene told CNN the incident began when Pledger's sister was preparing to give her victim impact statement in court. One of Pledger's sons, Anthony Dees, 30, was walking up with his aunt when he darted toward Williams, jumped over a table and tried attacking Williams. Three officers attempted to hold Dees, but he was able to wiggle himself free and continue his assault on Williams.

His younger brother, Jerome Stuart Dees, 23, could be seen in a video taken in the courtroom trying to run around officers as well to join in on the attack.

Video of the attack, provided by CNN affiliate WFMJ, shows all three men on the ground. One of the brothers was seen kicking Williams and the other was throwing punches as their aunt was banging her hand against a podium screaming.

“He killed my mother, man,” Jerome Stuart Dees told officers as he was being handcuffed. “That was my mama, she took care of me, bro.”