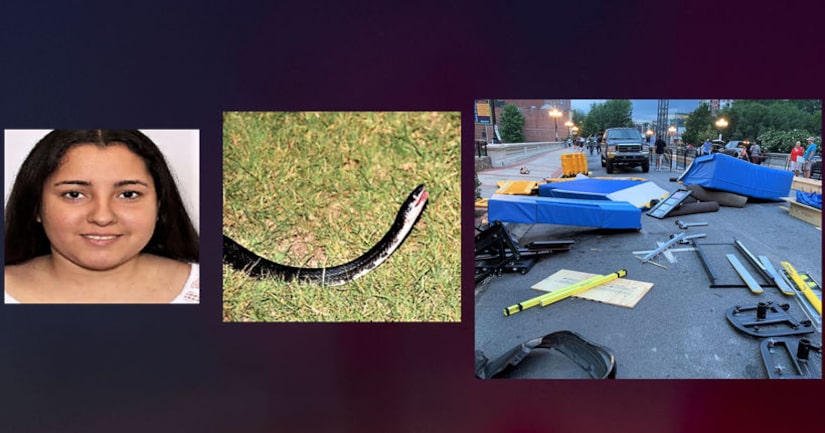 GREENVILLE, S.C. (KSWB) -- A South Carolina woman is accused of assaulting a woman with a snake Friday night, stealing her car and driving it through several police barriers in downtown Greenville, police said.

Officers were called to investigate a carjacking report at 8:20 p.m. Friday, according to a Greenville Police Deptartment news release.

The victim told investigators a woman threw sticks and a black snake at her before stealing her Honda CR-V.

At around 8:30 p.m., an officer saw someone drive through barriers set up for a pole-vaulting event scheduled for Saturday. Surveillance video shows the light-colored Honda smashing through the blockade before jumping onto the sidewalk, sending pedestrians running.

Police said they were then led on a chase through the city that ended when the SUV hit an occupied vehicle. Police arrested 29-year-old Hilmary Moreno-Berrios at the scene.

Moreno-Berrios was taken to the Greenville County Detention Center after she was arrested trying to get into a church, officers said. She was charged with carjacking and malicious damage to personal property, as well as traffic citations for a hit and run, failure to stop for blue lights, resisting arrest, driving on a closed street and reckless driving.

Authorities estimate the total cost of the damage to be about $17,225.