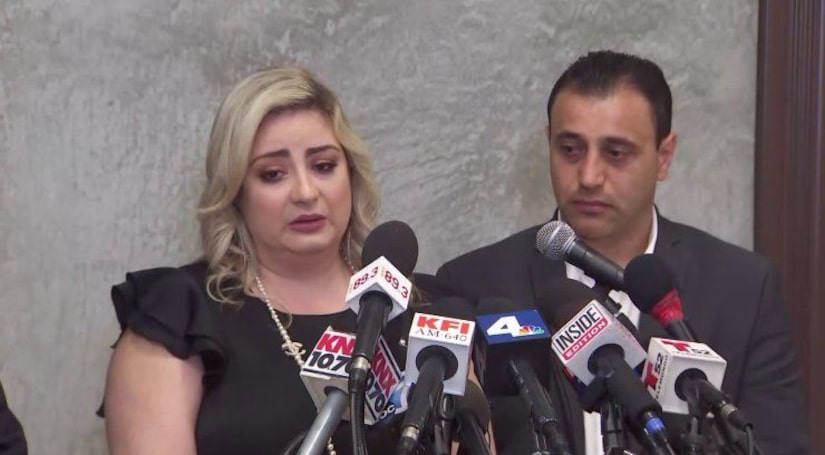 LOS ANGELES (KTLA) -- A Glendale couple spoke out Wednesday against a downtown Los Angeles fertility clinic after a New York woman gave birth to their child in an in vitro fertilization mixup involving three different couples.

CHA Fertility Center on Wilshire Boulevard implanted the couple's embryo through IVF in a woman who gave birth to the two babies in New York, and implanted the Glendale woman with an embryo from a third couple, lawyers from Peiffer Wolf Carr and Kane allege.

Each child born to the New York woman was found to be a genetic match to a different couple, lawyers said.

The New York couple, identified as A.P. and Y.Z., also filed a lawsuit against CHA Fertility Center on July 1, 2019, after a DNA test found that the two baby boys A.P. gave birth to were not a genetic match to the couple or to each other, CNN reported.

A.P. and Y.Z., who are both Asian, suspected a mixup when A.P. gave birth to two non-Asian babies.

The clinic later asked the Glendale couple, Anni and Ashot Manukyan, to come in for a DNA swab test that confirmed they were the parents, the family said.

The Manukyans then filed a lawsuit to recover their genetic child from the New York woman, in a legal process that took several months, the couple's lawyers said.

On Wednesday, the Glendale couple announced a lawsuit to "recover their losses and to sue for emotional distress inflicted in what is one of the worst embryo-related tragedies in U.S. history," the news release read.

“CHA robbed me of my ability to carry my own child—my baby boy—and to be with him in his first couple moments of his life," Anni Manukyan said at a news conference, tears streaming down her face.

The mother said the clinic never explained what happened the couple's other embryos, "leaving the possibility that another child is out somewhere and we don't know about.”

“CHA inserted a stranger's embryo into my womb, leaving us feeling violated by people that we trusted,” Anni Manukyan said.