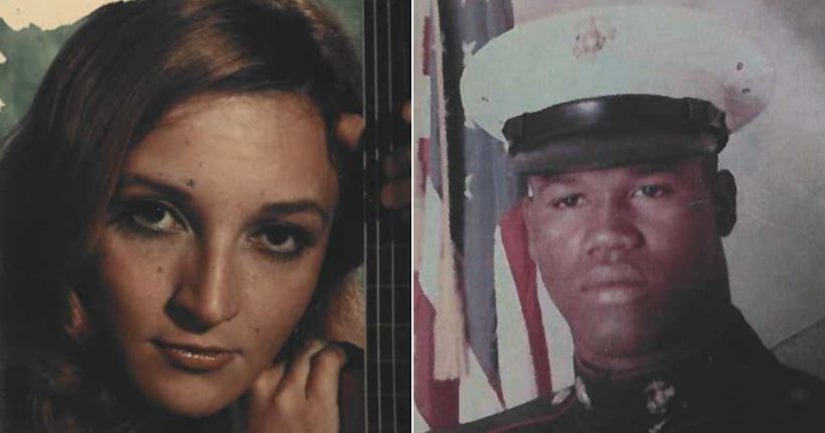 IRVINE, Calif. (KTLA) -- A former Marine has been arrested in the death of a woman found strangled near an Irvine military base 43 years ago, officials said Thursday.

Eddie Lee Anderson, 66, is suspected of killing 30-year-old Leslie Penrod Harris in May 1976 and dumping her body near the Marine Corps Air Station El Toro, which has since been decommissioned, Orange County sheriff's officials said in a news release.

Harris was dining with her husband at a restaurant in Costa Mesa the evening of May 17, but went out alone around 8:30 p.m. She still hadn't returned by the time the establishment closed, and her husband reported her missing, authorities said.

Around 4:30 a.m. the next morning, military police from the air base found Harris' body lying on a roadway just outside its perimeter. It was later determined she had been strangled, deputies said.

Detectives approached nearby businesses and taxi companies that served the area, but no leads were developed. Although officials suspected the killer was connected to the military, due to Harris' body being found in an area the general public was unfamiliar with, the case went cold.

There were multiple attempts — in 1997 and 2016 — to revive the case after advancements were made in DNA analysis, but no matches to the evidence collected during Harris' were found, detectives said.

But O.C. investigators began using genealogy to identify suspects in the case last year, and earlier this year a joint effort with the FBI helped them identify Anderson as a person of interest.

Further investigation led authorities to determine Anderson had been enlisted in the Marines and lived at the El Toro base in the early '70s.

When Harris was killed, he lived less than a mile from the restaurant she visited the night of her death, officials said.

This year on May 23, O.C. sheriff's officials traveled to Louisiana, where Anderson was living, to interview him.

After Anderson volunteered to provide a DNA sample, he was arrested on suspicion of murder last Friday, May 24, at his home in River Ridge, Louisiana.