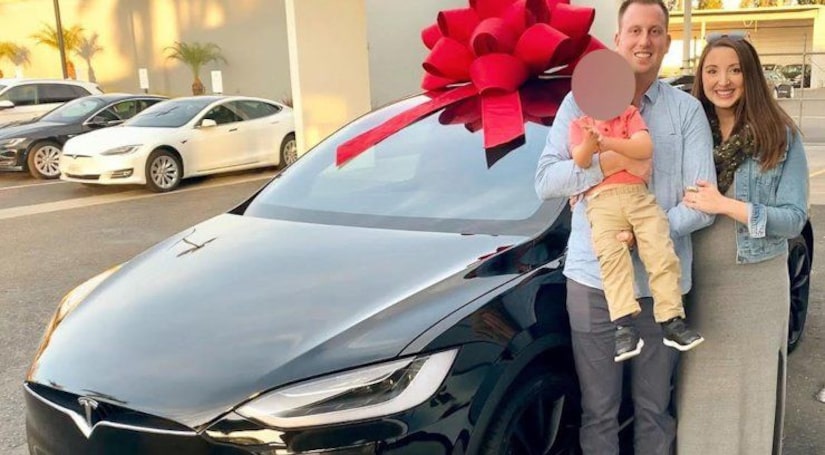 SANTA BARBARA, Calif. (KTLA) -- A Santa Barbara mother who says she was pinned against the wall of her garage by her 2018 Tesla Model X, seconds after her 2-year-old son jumped into the driver's seat, has filed a lawsuit against the automaker alleging a design flaw.

In a statement from an Orange County law firm announcing the suit, plaintiff Mallory Harcourt alleges the vehicle fails to "include proper safety control devices to ensure the vehicle isn't unintentionally operated," citing an incident that happened in her garage on Dec. 27, 2018, when she was eight months pregnant.

According to the lawsuit, Harcourt, 31, parked her three-day-old Tesla in her driveway and turned the motor off. With the falcon doors open, she took her son and then her groceries out of the SUV. She then walked toward her garage, with her son a few steps behind.

"The two-year-old runs back, climbs into the driver's seat, and as Mrs. Harcourt turns back, calling her son from the vehicle, the 5,500-pound SUV accelerates toward her," the statement reads.

Harcourt was allegedly "lifted, carried into the garage, slammed against the wall and pinned," by her Tesla.

She suffered a cracked pelvis in three places and a broken leg.

"I was trapped and had to scream until someone heard me and came for help," Harcourt said in the statement. "My toddler learned how to start and operate the Tesla faster than an adult can open a childproof bottle. We could have died, the public needs to know."

Gokal said Tesla instead responded to Harcourt's incident in a letter that said the SUV "responded to the operator's inputs, as designed."

The law firm provided a copy of the March 11 response letter, signed by Tesla general counsel Ryan A. McCarthy.

"We regret that this incident happened, however, we have not found any other instance of this sequence of events occurring — an unsupervised child manages to successfully shift the vehicle into gear and then apply the accelerator pedal — and we do not believe it reasonably foreseeable," McCarthy wrote.